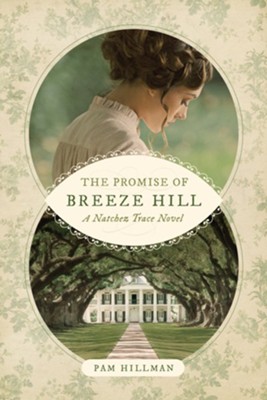 The Promise of Breeze Hill

▼▲
Natchez, MS; 1791
Anxious for his brothers to join him on the rugged frontier along the Mississippi River, Connor O’Shea has no choice but to indenture himself as a carpenter in exchange for their passage from Ireland. But when he’s sold to Isabella Bartholomew of Breeze Hill Plantation, Connor fears he’ll repeat past mistakes and vows not to be tempted by the lovely lady.

The responsibilities of running Breeze Hill have fallen on Isabella’s shoulders after her brother was found dead in the swamps along the Natchez Trace and a suspicious fire devastated their crops, almost destroyed their home, and left her father seriously injured. Even with Connor’s help, Isabella fears she’ll lose her family’s plantation. Despite her growing feelings for the handsome Irish carpenter, she seriously considers accepting her wealthy and influential neighbor’s proposal of marriage.

Soon, though, Connor realizes someone is out to eliminate the Bartholomew family. Can he set aside his own feelings to keep Isabella safe?

▼▲
Hillman (Claiming Mariah) sets this eloquent novel in volatile 18th-century Natchez, Miss. It is 1791, and Connor O’Shea, a highly skilled carpenter, has indentured himself to a local property owner to pay for his four brothers’ passage to America from Ireland. His new employer is Isabella Bartholomew, the only daughter of Breeze Hill plantation owner Master Bartholomew. After a house fire severely damaged the plantation and other disasters befell the family, Isabella is determined to get everything back to peak condition, and she believes Connor is perfect for the job. When they arrive at Breeze Hill, Connor observes a dearth of help to run such a vast property; he wonders if the family’s financial troubles run deeper than Isabella let on and whether she can be trusted to live up to her end of the bargain. The trials and tribulations of keeping the business afloat combine with predictable romantic sparks and the suspicion there might be someone intent on sabotaging the plantation. Hillman breezily weaves together colorful details, romantic tensions, and suspenseful plotting in this fun historical romance.
In 1791, Connor O’Shea arrives in Natchez, MS, from Ireland as an indentured servant. But his plan to send for his four brothers at the end of his term is thwarted by the untimely death of his master and the purchase of his papers by Isabella Bartholomew, who seeks a carpenter to help rebuild a burned wing of her family’s plantation home, Breeze Hill. Neighbor Nolan James Braxton is courting Isabella, yet his intentions are anything but honest. Although Isabella and Connor develop feelings for each other, she needs to keep the plantation running and seriously considers Nolan’s proposal. It is not long before Connor realizes that someone is trying to take over Breeze Hill and Isabella’s life. VERDICT Though some readers may have concerns about a relationship between characters with such a power imbalance, Hillman’s (Claiming Mariah) series launch set in antebellum Mississippi effectively mixes intrigue and suspense with a healthy dose of romance and historical details.
In the first of her new Natchez Trace series, Hillman carries readers to antebellum Mississippi in an entertaining tale. Greed, murder, and glimpses of the slave trade give it depth, while the subtle Christian themes provide hope.

▼▲
I'm the author/artist and I want to review The Promise of Breeze Hill.
Back
Back