Skip to main content
Get Christmas Ready Sale: Deals on over 1,150 titles thru 9/27.
The Priest, Sons of Encouragement Series #1
By: Francine Rivers
Stock No: WW382658 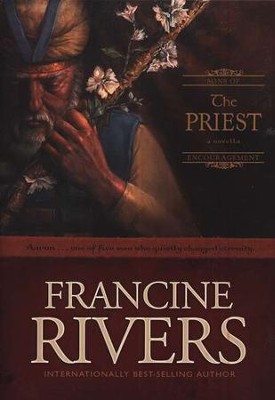 The Priest, Sons of Encouragement Series #1

▼▲
His courage covered his brother's fear. His sacrifices atoned for the people's sin. His voice carried the words of God. This is Aaron, brother of Moses; symbol of our great High Priest. The Priest is volume 1 in the "Sons of Encouragement" series by best-selling author Francine Rivers.

▼▲
Book 1 in the 5-book biblical historical fiction series by the New York Times bestselling author of Redeeming Love and A Voice in the Wind.

His courage covered his brother’s fear.
His sacrifices atoned for the people’s sin.
His voice carried the words of God.

Moses parted the Red Sea. But in his shadow stood Aaron, a man who symbolizes forever our great High Priest. Be challenged by this faithful man whose story we must never forget.

The Priest is the story of Aaron and book one in the popular Sons of Encouragement series about five men who quietly changed eternity.

“Rivers delivers. Those two words say it all. Rich characterization and gripping plot are contained between the hard covers of this neatly crafted novella.”
—RT Book Reviews

▼▲
In her Lineage of Grace series, the award-winning Rivers successfully explored the lives of five biblical women. Here, in the first of her Sons of Encouragement series, she turns her attention to the life of Aaron with less stellar results. A jealous Aaron grows up in the shadow of his younger brother Moses. Yet when God calls him to assist Moses in leading the enslaved Israelites to freedom, Aaron finds love for his brother. In the wilderness, disastrous disobedience to God follows, and Aaron must come face-to-face with the knowledge of his own unworthiness and the sins of the Israelites. "It would take a bigger miracle than plagues and parting the Red Sea to change the hearts of these people," he realizes. When he's chosen as high priest, the daily sacrifices Aaron makes torment him, and he dreams of fire and blood. The first portion of the book feels flat, as if Rivers may have relied too heavily on the scriptural text. Her ability to weave sexual tension throughout her novels has been one of the talents of this former general market romance writer, but she fails to take advantage of several opportunities here. By the last third of the book, however, the narrative improves, as Rivers convincingly envisions the emotions and intrigue that surely permeated the biblical events. Rivers is a deservedly popular author, and her loyal fans will likely embrace her new series despite some shortcomings. (May) Copyright 2004 Reed Business Information.

▼▲
I'm the author/artist and I want to review The Priest, Sons of Encouragement Series #1.
Back
Back