The Pre-Wrath Rapture
By: Renald Showers 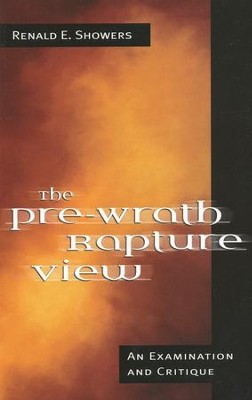 ▼▲
An authoritative and biblical critique of the recent Pre-Wrath Rapture theory popularized by Rosenthal and Van Kampen.

▼▲
In the late 1990's, Robert Van Kampen and Marvin Rosenthal introduced the "pre-wrath rapture" view, a new understanding of the time of God's rescue of His church from the worldwide "Day-of-the-Lord wrath." Positioned between the traditional "mid-tribulation" and "post-tribulation" views of Christ's return, the "pre-wrath rapture" places the rapture after most the seven-year 70th week of Daniel but before God unleashes His final wrath. The author, a longtime friend of Van Kampen and Rosenthal, has interacted extensively with the pre-wrath rapture theory since its inception and now offers an authoritative and biblical critique of this recent addition the prophetic landscape.

▼▲
I'm the author/artist and I want to review The Pre-Wrath Rapture.
Back
×
Back
×