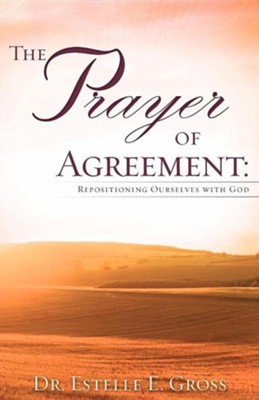 The Prayer of Agreement

▼▲
God desires a relationship with all mankind. Jesus Christ came to restore the broken union between man and God. His death and resurrection opened the door that can, once again, connect heaven and earth in a unique way. THE PRAYER OF AGREEMENT was written to help all believers know they can reposition themselves with God. Imagine what would happen if every believer took the promises of God seriously. Then imagine being armed with the Word, joined with others in prayer, and fully expecting the will of God to be accomplished on earth as it is in heaven. Would not the church be empowered if it became a house of prayer that produced results? As a believer, explore the promises of God and join forces in THE PRAYER OF AGREEMENT. This world can be touched with the reality of a living God, active in our world. ESTELLE E. GROSS is founder and Executive Director of "Right Way" Ministries International, Inc. (RWMII) in Baltimore, Maryland. Founded 25 years ago, RWMII has taken Dr. Gross to Europe, Asia, Africa, South America, and across the United States, including work among the American Indians. Unleashing God's power through the Prayer of Agreement has been a motivating force behind the success of RWMII and now this book reveals these truths. Dr. Gross hopes it will move the church into the miraculous as prayer partners join forces with Almighty God. Dr. Gross graduated from the Washington Bible College and Capitol Bible Seminary in Lanham, Maryland. When not traveling, she ministers at her home church, Marley Park Church of the Nazarene.

▼▲
I'm the author/artist and I want to review The Prayer of Agreement.
Back
×