The Portrait of A Lady - eBook
By: Henry James, Regina Barreca, Colm Toibin 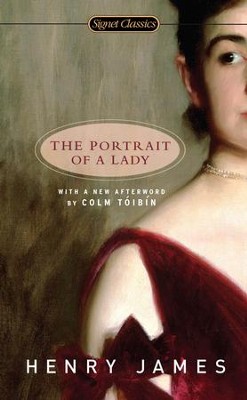 The Portrait of A Lady - eBook

▼▲
The Portrait of a Lady is Henry James’s classic novel featuring the strong and spirited Isabel Archer, the embodiment of women’s independence and strength.

The heroine of this powerful novel, often considered James’s greatest work, is the vivacious young American Isabel Archer. Blessed by nature and fortune, she journeys to Europe to seek the full realization of her potential—or in modern terms, "to find herself"—but what awaits her there may prove to be her undoing.

During her journey, wooers vie for her attentions, including an English aristocrat, a perfect American gentleman, and a sensitive expatriate. But it is only after the ingenue falls prey to the schemes of an infinitely sophisticated older woman that her life takes on its true form. With its brilliant interplay of tensions and characters, The Portrait of a Lady is a timeless and essential American novel.

With an Introduction by Regina Barreca
and an Afterword by Colm T&oacute;ib&iacute;n

▼▲
Henry James was born on April 15, 1843, on Washington Place in New York to the most intellectually remarkable of American families. His father, Henry James Sr., was a brilliant and eccentric religious philosopher; his brother was one of the first great American psychologists and the author of the influential Pragmatism; his sister, Alice, though an invalid for most of her life, was a talented conversationalist, a lively letter writer, and a witty observer of the art and politics of her time.In search of the proper education for his children, Henry senior sent them to schools in America, France, Germany, and Switzerland. Returning to America, Henry junior lived in Newport, briefly attended Harvard Law School, and in 1864 began contributing stories and book reviews to magazines. Two more trips to Europe led to his final decision to settle there, first in Paris in 1875, then in London next year.James's first major novel, Roderick Hudson, appeared in 1875, but it was Daisy Miller (1878) that brought him international fame as the chronicler of American expatriates and their European adventures. His novels include The American (1877), Washington Square (1880), Princess Casamassima (1886), and the three late masterpieces, The Wings of the Dove (1902), The Ambassadors (1903) and The Golden Bowl (1904). He also wrote plays, criticism, autobiography, travel books (including The American Scene, 1907) and some of the finest short stories in the English language.His later works were little read during his lifetime but have since come to be recognized as forerunners of literary modernism. Upon the outbreak of World War I, James threw his energies into war relief work and decided to adopt British citizenship. One month before his death in 1916, he received the Order of Merit from King George V.

Regina Barreca is a professor of English and feminist theory at the University of Connecticut. She is the editor of seven books, including The Penguin Book of Women's Humor, and the author of four others. She writes frequently for the New York Times, Chicago Tribune, and Hartford Courant.

Colm T&oacute;ib&iacute;n is an internationally acclaimed, award-winning author. His novels include The Master, winner of the International IMPAC Dublin Literary Award, Le prix du meilleur livre &eacute;tranger, and the Los Angeles Times Book Prize for Fiction; and Brooklyn, winner of the Costa Book Award. His works also include The Empty Family, The Testament of Mary, and Nora Webster. He lives in Dublin, Ireland.

▼▲
I'm the author/artist and I want to review The Portrait of A Lady - eBook.
Back
×
Back
×