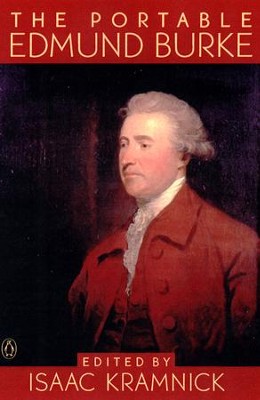 ▼▲
The intellectual wellspring of modern political conservatism, Edmund Burke is also considered a significant figure in aesthetic theory and cultural studies. As a member of the House of Commons during the late eighteenth century, Burke shook Parliament with his powerful defense of the American Revolution and the rights of persecuted Catholics in England and Ireland; his indictment of the English rape of the Indian subcontinent; and, most famously, his denouncement of English Jacobin sympathizers during the French Revolution. The Portable Edmund Burke is the fullest one- volume survey of Burke's thought, with sections devoted to his writings on history and culture, politics and society, the American Revolution, Ireland, colonialism and India, and the French Revolution. This volume also includes excerpts from his letters and an informative Introduction surveying Burke's life, ideas, and his reception and influence in the nineteenth and twentieth centuries.

▼▲
Edmund Burke (1729-1797) was born in Dublin and educated at Trinity College. A lifelong member of Parliament, Burke was the author of A Philosophical Enquiry into the Sublime and Beautiful, A Vindication of Natural Society, and Reflections on the Revolution in France.
Isaac Kramnick was born in 1938 and educated at Harvard University, where he received a B.A. degree in 1959 and a Ph.D. in 1965, and at Peterhouse, Cambridge. He has taught at Harvard, Brandeis, Yale and Cornell, where he is now Professor of Government. He is married to Miriam Brody Kramnick and lives in Ithaca, New York. Among his publications are Bolingbroke and His Circle, The Rage of Edmund Burke and numerous articles on eighteenth century topics. He has edited William Godwin’s Enquiry Concerning Political Justice, The Federalist Papers by James Madison, Alexander Hamilton and John Jay and, with Michael Foot, The Thomas Paine Reader for the Penguin Classics. Most recently he is the author, with Barry Sheerman, MP, of Laski: A Lift on the Left.

▼▲
I'm the author/artist and I want to review The Portable Edmund Burke - eBook.
Back
×
Back
×