Skip to main content
SPRING CYBER EVENT STARTS NOW: And it's a really BIG deal! Up to 88% off through 5/24>
The Pledge: One Nation Under God
By: William J. Murray
Stock No: WW570358 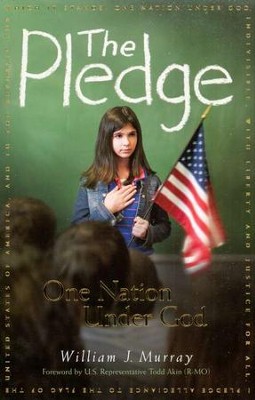 The Pledge: One Nation Under God

▼▲
At once an in-depth analysis of Christianity's influence in American justice and social systems (going all the way back to the First Virginia Charter in 1606) and a wonderful resource for anyone interested in the defense of the words "...one nation under God..." as part of the Pledge of Allegiance, The Pledge does both concisely and eloquently. The attack on the affirming addition to the original pledge is laid bare, and the enemies are clearly identified. Many Americans want to either deny the heritage and roots of the social and moral bedrock of this country or deny the teaching of these clear and important foundations to our youth. William Murray's book is a call to return to the truths of America's Christian heritage.
Quoting extensively from source material, Murray, son of notorious atheist Madalyn Murray O'Hair, exposes the fallacy of 'separation of church and state', documents the long history of ACLU hostility towards Christianity, and cuts to the root of this modern threat facing the church. Comprehensive, educational and convicting, this is knowledge that every Christian should have.

▼▲
The Pledge: One Nation Under God traces our religious freedoms to the settlement of America and asserts that the legal attacks against the ?Pledge of Allegiance? are part of a nationwide, coordinated effort spearheaded by the ACLU and militant atheists like Michael Newdow to change America's culture and government into totally secularized, godless entities.

▼▲
I'm the author/artist and I want to review The Pledge: One Nation Under God.
Back
Back