The Plans I Have For You
By: Amy Parker
Illustrated By: Vanessa Brantley-Newton 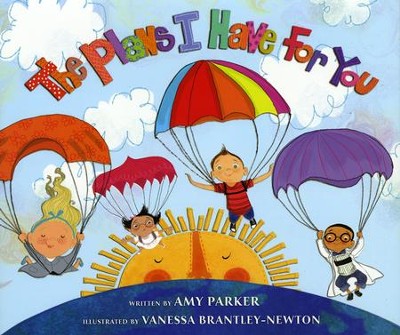 The Plans I Have For You

The Plans I Have for You combines playful rhyming text written by bestselling children’s book author Amy Parker with whimsical illustrations by award-winning artist Vanessa Brantley-Newton to create a book that inspires readers of all ages to dream about their future. God has great plans for each and every one of us, and this book encourages children to think about the talents that make them special and will help them imagine how God may use our unique traits to make the world a better place.

Vanessa Brantley-Newton is a self-taught illustrator, doll maker, and crafter. Her passion for children’s books began when she came across The Snowy Day by Ezra Jack Keats as a child in the 1960s. Growing up in a musical family who loved to sing, Vanessa’s illustrations are as fun and whimsical as a beautiful melody. Vanessa currently makes her nest in Charlotte, NC with her husband of 20 years, their daughter, and a very rambunctious cat named Stripes.

▼▲
Amy Parker's August release, The Plans I Have For You is sure to become a favorite of children ages three to seven although the recommendec;l age is 4-8. The rhythmic, rhyming text, enhanced by the whimsical illustrations of Vanessa Brantley-Newton, teach children are unique. Each one created with special talents and abilities according to God's plan and purpose found in Jeremiah 29: 11.'For I know the plans I have for you...plans to prosper you and not to harm you...plans to give you hope and a future.' Written from God's point-of-view, the jacketed thirty-two page hardcover uses story-in-rhyme to teach about Jesus, the Bible and God's plan for the reader. 'You are my hands and my feet there on Earth. I've given you a purpose - it's been there since birth.' 'I've left you instructions - right here in my book. So open it often - and take a good look.' Colorful illustrations mirror a variety of trades, professions and careers such as pilots, builders, chefs, doctors, nurses, artists and musicians who dance across two-page spreads to ignite children's dreams. This Christian themed children's book, The Plans I Have For You is sure to become a family favorite.
For Christian children wondering what God has in store for them, Parker (My Christmas List) offers a playfully reassuring rhyme, written from the perspective of an enthusiastic deity. The focus is on future careers ('I need you in a hospital/ and you at the zoo./ You'll be an entomologist/ in a forest in Peru'), though a spread in which four children peruse a Bible is decorated with words like 'patience' and 'kindness,' emphasizing altruistic values. Brantley-Newton (My Three Best Friends and Me, Zulay) draws from an array of visual influences in her always energetic illustrations. In one early scene, a hand points out at readers from a cloud, like an Uncle Sam recruitment poster; elsewhere, children sit on an assembly line (which stretches over several pages) as robot arms outfit them with stethoscopes, musical instruments, and other gear. Parker's meter can be slightly shaky, and there's an overreliance on certain rhymes (you/do gets a workout, in particular), but the encouraging tone, range of careers represented, and ethnically diverse cast create the sense that the sky's the limit.
“You are my hands and my feet there on Earth,” narrator God says to an array of kids. “I’ve given you a purpose---it’s been there since birth!” Splashy, energetic illustrations introduce us to the YOU Factory, a colorful, Willy Wonka–style building where God makes kids, imbuing them with all the skills they will need to be successful in life. Each has a specific purpose---a nurse, a zookeeper, an entomologist---and are encouraged to find the one thing that inspires them. The factory metaphor may not hold up under intense scrutiny, but the find-your-passions message is an appealing one. The joyful, rhyming text and bright, whimsical illustrations make this well suited for read-alouds, and the religious elements are gently woven into the story---though God and the Bible both appear, neither is referred to by name---making this somewhat more accessible to a wider denomination. Parents raising their children to have faith in both themselves and in a higher power will appreciate this offering. --- Maggie Reagan
The Plans I Have for You is a rhyming picture book by Amy Parker that introduces the Scripture of Jeremiah 29:11. A diverse cast of children learn that God has given everyone unique talents and a purpose for each of them. God Himself is the voice of the story, opening with, “Hey, YOU! I’ve got big plans for you!” With Amy Parker’s lighthearted verse, He motivates children to open their hearts, read the Bible, explore their passions, and discover His path for their lives. “You are my hands and my feet there on Earth,” He tells the children, with the comforting message that He has equipped us with all that we need to find our way in the world. Lively illustrations and creative graphics by Vanessa Brantley-Newton show multi-ethnic children engaged in all sorts of professions, suggesting a promise of fulfilling futures that await. The bright scenes are tender and engaging, with a touch of humor (a busy nurse has seven arms) and the constant reminder of a guiding presence.With its sing-song cadence, timeless message, and whimsical artwork, The Plans I Have for You is an entertaining read as well as a teaching tool. Just as the young characters on the cover float contentedly on colorful parachutes, this delightful story will make the heart soar. Nina Ditmar, CLJ

▼▲
I'm the author/artist and I want to review The Plans I Have For You.
Back
×
Back
×