The Patient One
By: Shelly Shepard Gray 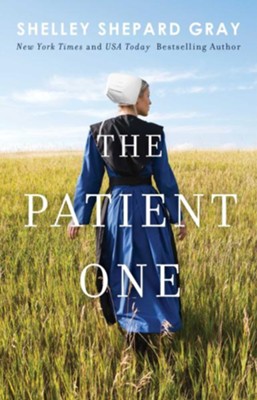 When word had gotten out that Andy Warner had committed suicide, everyone in Walnut Creek, Ohio, had been shocked. For seven men and women in their twenties, some Amish, some Mennonite, and some English, each of whom had once counted his or herself as one of Andy's best friends, it had been extremely painful.

And, maybe, a source of guilt.

Years have passed since they'd all been together last. Some of them got into trouble. A couple got into arguments. Eventually they all drifted apart. But even though none of them really saw each other anymore, there was a steadfast certainty that they'd always have each other's backs-even when no one else did. Their bond was that strong until Andy did the unthinkable.

Now the seven remaining friends, still reeling from Andy's death, have vowed to look after each other again. As far as they're concerned, it doesn't matter that they're now in their twenties and have drifted far apart. They need to connect again, for Andy.

▼▲
A practicing Lutheran, Shelley Shepard Gray is the New York Times and USA TODAY bestselling author of more than eighty novels, translated into multiple languages. In her years of researching the Amish community, she depends on her Amish friends for gossip, advice, and cinnamon rolls. She lives in Colorado with her family and writes full time.

▼▲
"Gray tells a beautiful story of friendship love and truth born out of pain and grief. This story reminds us to hold those we love close."
"Gray has created an endearing cast of characters...that both delights and surprises—and kept me thinking about the story long after I turned the last page. Bravo!"
"A pleasing story about recovering from grief and a solid beginning for a new series."
"Like sunshine breaking through clouds . . . readers who love Amish stories and/or Christian fiction are sure to take pleasure in following the saga of this wonderful group of friends [who] learn to support each other and follow their hearts as they attempt to discern God's will in their lives."


"A very compelling . . . novel of friendship and healing. . . . Once you read THE PATIENT ONE, you will be impatiently awaiting the next in the series!"

▼▲
I'm the author/artist and I want to review The Patient One.
Back
×