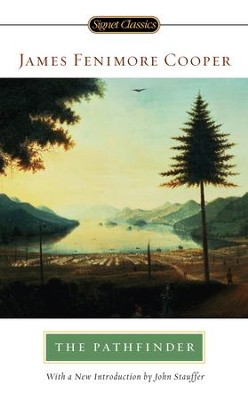 Vigorous, self-reliant, amazingly resourceful, and moral, Natty Bumppo is the prototype of the Western hero. A faultless arbiter of wilderness justice, he hates middle-class hypocrisy. But he finds his love divided between the woman he has pledged to protect on a treacherous journey and the untouched forest that sustains him in his beliefs. A fast-paced narrative full of adventure and majestic descriptions of early frontier life, Indian raiders, and defenseless outposts, The Pathfinder set the standard for epic action literature.

▼▲
James Fenimore Cooper (1789-1851) was born in New Jersey but grew up in Cooperstown, NY, founded by his father when Cooper was one year old. He enrolled at Yale at the age of thirteen, but was expelled in his third year for misbehavior. He then sailed before the mast as a merchant seaman and as a midshipman in the U.S. Navy, experiences that led to his successful sea novels, such as The Pilot (1823). The Leatherstocking Tales were published from 1823 to 1841. Arranged according to the chronology of their hero, Natty Bumppo, who appears under various names in all five romances, the sequence is The Deerslayer, The Last of the Mohicans, The Pathfinder, The Pioneers, and The Prairie.

John Stauffer is a professor of English, African, and African American Studies, and the History of American Civilization at Harvard University. He is the author of the award-winning The Black Hearts of Men: Radical Abolitionists and the Transformation of Race (2002) and numerous essays in such publications as Time, Raritan, and 21st: The Journal of Contemporary Photography.

▼▲
"Cooper emphatically belongs to the nation. He has left a space in our literature which will not easily be supplied."—Washington Irving"His memory will exist in the hearts of the people...[and his works] should find a place in every American’s library."—Daniel Webster

▼▲
I'm the author/artist and I want to review The Pathfinder - eBook.
Back
×
Back
×