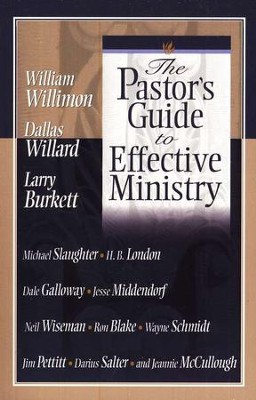 The Pastor's Guide to Effective Ministry

▼▲
You're trained to preach, teach, and do outreach---but is that enough when you're deep in the trenches of ministry? Offering solid advice on 13 crucial aspects of a pastor's personal and professional life, ministry experts H.B. London, Dallas Willard, William Willimon, and others provide a much-needed handbook for staying vocationally and spiritually sharp. 151 pages, softcover from Beacon Hill.

▼▲
PASTOR&#151You’ve been trained to preach and to teach and to do outreach. How’s it going now that you’re in the trenches?How are you doing professionally?Do you still have the big picture of your call and your vision in view?Are you finding time and resources to nurture your congregation?Are you controlling the administration of your church, or is it controlling you?How are you doing personally?Is your family life in shape?Are you taking care of yourself physically and emotionally?Are your personal finances in order?Larry Burkett, Dallas Willard, William Willimon, Dale Galloway and other well-known church leaders provide solid advice for your personal and professional development.Keep The Pastor’s Guide to Effective Ministry on top of your desk as you face the day-to-day challenges of ministry.

▼▲
Dr. Neil B. Wiseman’s involvement in pastoral development includes 15 years teaching at Nazarene Bible College, pastoring local congregations, directing clergy services for the denomination, and teaching and serving as college chaplain at Trevecca Nazarene University at Nashville.Wiseman served as founding editor of GROW magazine and continued for eleven years in that assignment. He founded and directed the Small Church Institute for ten years. He started a monthly audio sermon resource for pastors called Preaching Today. He also produced two audio clubs called the Layman’s Tape Club and the Minister’s Tape Club.Wiseman was the founder and director of the first PALCON (Pastor’s Leadership Conferences). His development of ministers in the classroom includes courses in preaching, spiritual formation, life and work of the minister, and leadership. And he now serves as a resource person in pastors’ retreats or continuing events-having been on more than 30 districts in three years.He now gives his full attention to writing and speaking in pastors’ retreats, laypersons’ retreat, and continuing education events for ministers. Larry Burkett founded Christian Financial Concepts, Inc. (now Crown Financial Ministries). He dedicated his life and ministry to teaching biblical principles of financial management. He published over 50 books with total sales of over two million. Wayne Schmidt, D. Min., has served as a pastor at Kentwood Community Church near Grand Rapids, Michigan since its inception in 1979. From a small care group it has grown to a vibrant congregation averaging over 2500 in weekend worship services. Wayne has authored Soul Management, Leading When God is Moving, and coauthored Accountability: Becoming People of Integrity. He and his wife Jan enjoy parenting their children: Chris, Jordan, and Elsie. H.B. London, Jr. is Vice President of Ministry Outreach/Pastoral Ministries at Focus on the Family in Colorado Springs, CO. A fourth generation minister, he pastored churches for thirty-one years before accepting his present position in 1991. His ministry has taken him around the world in specialized assignments related to revival, church growth, missions development, evangelism, and pastoral training. A first cousin to Dr. James C. Dobson. H.B.’s assignment at Focus on the Family is ministry to pastors and their families. Beverley London was raised near Turlock, California, and attended Pasadena College. She has been married to H.B. since 1957. She has been a housewife and mother since their first child was born in 1959. From the beginning days of their ministry, Beverley has served the church and contributed to their shared ministry through music. She is an accomplished pianist and organist. Beverley enjoys home decorating, travel, flower gardening, and time spent with her four grandchildren. Dr. Jesse Middendorf currently serves as executive director for the Center for Pastoral Leadership at Nazarene Theological Seminary. He served for twenty-eight years as pastor in the Church of the Nazarene, ten of those years at Kansas City First Church. He served as district superintendent on the Northwest Oklahoma district for five years and spent twelve as a general superintendent, retiring in 2013. William Willimon, S.T.D., has been dean of the Chapel and professor of Christian ministry at Duke University in Durham, North Carolina, since 1984. He has served as pastor of churches in Georgia and South Carolina. In 1996, an international survey conducted by Baylor University named him one of the Twelve Most Effective Preachers in the English-speaking world. He is the author of 50 books. His articles have appeared in many publications including The Christian Ministry, Worship, and Christianity Today. His Pulpit Resource is used each week by over 8,000 pastors in the U.S.A., Canada, and Australia. He serves on the editorial boards of The Christian Century, The Christian Ministry, Pulpit Digest, Preaching, The Wittenburg Door, and Leadership. He has given lectures and taught courses at many pastors’ schools, colleges, and universities in the United States, Canada, Europe, and Asia. He is married to Patricia Parker. The Willimons have two children: William Parker and Harriet Patricia. Dale Galloway has achieved international recognition as a pastor, teacher, and mentor. He is a popular speaker who has a history and a heart for training pastors. He has pastored four churches and written 22 books. Dale graduated from Olivet Nazarene University and Nazarene Theological Seminary and earned his doctorate from Western Evangelical Seminary. He and his wife live in Phoenix. Jeannie McCullough is the founder of the Wisdom of the Word Bible Study series and is a frequent speaker at conferences and retreats throughout North America. She lives with her husband in Kansas City. Darius Salter is currently devoting his time to writing and itinerate preaching. He is completing a biography of Methodist Bishop Matthew Simpson, the clergyman closest to Abraham Lincoln during the Civil War and who preached Lincoln’s funeral. Salter is the author of seven books, including America’s Bishop, the first comprehensive biography written on Francis Asbury. He also chairs the Board for New Fields Ministries, an inter-denominational missionary organization. Dr. Salter is a graduate of Kentucky Mountain Bible College, Asbury College, and Asbury Theological Seminary. He completed the Ph.D. at Drew University and taught seminary for 24 years. He pastored for 12 years, and has preached on 6 continents. Dr. Salter served as Executive Director of the Christian Holiness Association, an inter-denominational fellowship consisting of many denominations, colleges and universities, and mission organizations. He is an ordained Elder in the Church of the Nazarene. Kentucky Mountain Bible College named him its Alumnus of the Year in 2011.Darius is married to Brenda. They are the parents of four daughters, all who played four years of collegiate softball.

▼▲
I'm the author/artist and I want to review The Pastor's Guide to Effective Ministry.
Back
Back