EARLY CHRISTMAS SALE: Shop over 900 items up to 85% off through 9/29 >
The Parables of Jesus DVD Bible Study
By: Matt Williams 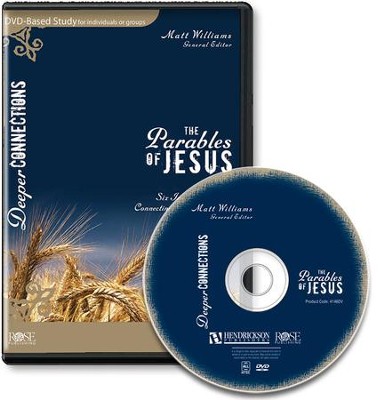 Jesus communicated deep spiritual truths through simple, vivid, and engaging stories. Woven from the stuff of everyday life, the parables of Jesus made the kingdom of God understandable and accessible to his listeners. In six engaging, interactive small group sessions, this Deeper Connections DVD will give you new insights into his parables and their meanings that will help you to appreciate more fully their relevance for your own life. With maps and pictures, outlines, key Scripture verses, discussion questions, plenty of room for note taking, and a personal five-day Bible study for each session, the participant's guide will help you get the most out of The Parables of Jesus, both in your group and in applying what you learn to your life. Deeper Connections Series: Unlike any other Bible study available, this visually stunning DVD series is written and taught by biblical experts-six professors with specialized areas of knowledge.

From the parable of the prodigal son to the mountain-moving faith of a mustard seed, gain powerful historical insights and perspective-shifting cultural context behind the parables of Jesus with this 6-session DVD study. Unlike most Bible studies available, each session begins in Israel, making it easier to experience and understand the cultural background of key events. This dynamic and easy-to-understand study is written and taught by biblical experts with specialized areas of knowledge. It comes with a downloadable leader guide—so anyone can lead this study! Also available: Participant Guides (ISBN: 9781628627657).

Jesus communicated deep spiritual truths through simple, vivid, and engaging stories. Woven from the fabric of first-century Jewish everyday life, the parables of Jesus made the kingdom of God understandable and accessible to his listeners. In six engaging, interactive small group sessions, this Deeper Connections DVD study will give you the necessary historical background and fresh new insights into Jesus' parables and their meanings to help you apply these lessons to your own life.

6-Session Overview of the Parables of Jesus

From the parable of the mustard seeds to the parable of the prodigal son, get a fantastic overview of 6 major key parables Jesus shared with followers and pharisees alike and what they meant in first-century Jewish and Roman culture:

Each session of this DVD study includes:

Also available is a FREE leader guide with step-by-step suggestions to get the most out of this study including a materials list, session outlines, time frame for 60- and 75-minute session options with extensions, leading tips, and more! It's never been easier to lead! Perfect for small groups, Bible studies, or personal use.

Hike through the mustard fields of Capernaum, just north of the Sea of Galilee, and discover why Jesus strategically chose this region to call his disciples, teach the Sermon on the Mount, and focus his ministry. Dive into the parables of the weeds, mustard seeds, and yeast with Dr. Michael Wilkins teaching from lush farmlands of California. What do these three parables say about the Kingdom of God and why did Jesus tell them one after the other? How did first-century Christians interpret these stories and what can we glean from their perspective today? Dive into the transformational power of the gospel and learn how to start applying it to your life today!

Session 2: The Grace of the Kingdom: Two Debtors

Explore the ruins of the ancient town of Chorazin, which was once full of synagogues, thriving markets, and bustling roads. Join Dr. Gary Burge on the fast-paced and cosmopolitan streets of Chicago, a great backdrop for learning about the urban centers of Galilee that were filled with both religious people and those on the margins of society. Discover the three key Jewish greeting rituals the pharisees omitted to publicly shame Jesus: the same three rituals the woman with the perfume used to honor him. The incredible cultural connections set the scene for the parable of the two debtors, the powerful link between forgiveness and grace, and much more.

Session 3: The God of the Kingdom: The Prodigal Son

Travel along gentile ruins of the city of Susita, where—to first-century Jews—temptation, pagan temples, and danger lurked in around every corner. This was exactly like the city the prodigal son would have run off to and squandered his father's money. In Gloucester Harbor, Dr. Ben Witherington III profoundly ties the parable of the prodigal son not only to the lavish forgiveness of God the Father, but also to religious devotion, unconditional love, and more. Unpack the cultural background and spiritual symbolism of birth order and Jewish codes of honor and shame, and learn how we can become God's hands and feet in his mission to redeem the lost.

Session 4: The Demand of the Kingdom: Treasure and Pearls

Trek through the fields surrounded by the Carmel Mountains, much like the fields early Christians would have pictured when Jesus described the parable of buried treasure. Follow Dr. David Garland through the mountains of Colorado, where miners once flooded in from everywhere to strike it rich. Discover fascinating cultural context behind Jewish law that dramatically changes how we in the modern era should read these parables and how we can view the Kingdom of Heaven.

Session 5: The Mission of the Kingdom: The Wedding Banquet

Venture through the rooms of a Roman Jewish villa, where parties and maybe even weddings were hosted in Jesus' day. Dive into the exciting and fascinating cultural details and politics of a first-century Jewish wedding as you learn about the gracious, jarring, and often confusing parable of the wedding banquet. Tour wine country of Southern California, as Dr. Matt Williams takes you through the customs of invitations, preparation, dress, political symbolism, and more so you can make deeper connections between our actions and the Kingdom of Heaven.

Session 6: The Fulfillment of the Kingdom: Sheep and Goats

Travel along the road to Jericho, home to Bedouin people and shepherds and land of sheep and goats. Dr. Gary Burge teaches about the parable of the sheep and goats from the scorched hills of Southern California to answer these age-old questions: why do bad things happen to good people? What is hell? Do good works and faith help us gain salvation? Understand how eternal destiny is connected to how we treat and love others and discover what special message he has for Christians on the front lines of evangelism.

▼▲
I'm the author/artist and I want to review The Parables of Jesus DVD Bible Study.
Back
×
Back
×