Skip to main content
The Parables of Dr. Seuss
By: Robert L. Short
Stock No: WW230470 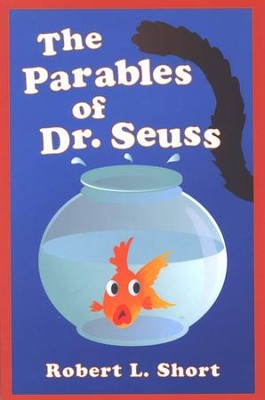 The Parables of Dr. Seuss

▼▲
Short, who is well-known for his probing studies of Charles Schultz's famous cartoon series Peanuts, now uncovers Christian truths and theological parallels in the wild and wacky adventures of Theodore Geisel's Cat in the Hat, Green Eggs and Ham, Horton Hears a Who, How the Grinch Stole Christmas. . . . 94 pages, softcover.

This breezy and engaging book will delight the Dr. Seuss fan in all of us. Robert Short looks at spirituality in the stories of children's book author and illustrator Theodore "Dr. Seuss" Geisel, arguing that Geisel was "a first-class Christian thinker." The book explores Green Eggs and Ham, Horton Hears a Who, How the Grinch Stole Christmas, and others.

Short writes in the introduction, "When I first became acquainted with his books and was struck by the many parallels I saw between his work and what is said in the Bible and by Christian faith, I considered these similarities to be merely 'happy accidents.' Today I still see these parallels as 'happy,' but I'm now convinced that they are not merely 'accidents.'"

▼▲
Robert L. Short is perhaps best known for his first book, The Gospel according to Peanuts, which was lauded by The New York Times Book Review as "a 'perilous experiment' that comes off and earned the "admiration and respect of Peanuts creator Charles M. Schulz. An ordained Presbyterian minister, he regularly traveled and preached throughout the country, presenting programs in Christian faith and the arts at churches and colleges. His other books include Something to Believe In, The Gospel According to Dogs, and The Parables of Dr. Seuss.

▼▲
A generation ago, Short hit a nerve with The Gospel According to Peanuts, which sold more than 10 million copies and launched a series of Gospel According to books about religion and popular culture. Here, with more mixed results, Short offers the same treatment to the stories of Theodor Geisel, a.k.a. Dr. Seuss, who is often dismissed as a childrens writer rather than the first-class Christian thinker Short feels he is. Short tackles eleven Seuss tales, from the famous and well-known (How the Grinch Stole Christmas and Green Eggs and Ham), to the little-read (I Had Trouble Getting to Solla Sollew, which Short confesses is his personal favorite). Drawing on the Bibleespecially Paul and the Gospelsand the plays of William Shakespeare, Short presents quick theological readings of these stories, with the highlight being the creative cat-echism he crafts as a creed from The Cat in the Hat. He points out some things Seuss fans may not have noticed, i.e., the Lorax may well be an acronym for the Lord and Christ, making it a parable about faith rather than merely a lesson on environmental responsibility. Despite these flashes of brilliance, the book feels thin and disjointed, with waiflike chapters existing best as individual micro-essays rather than part of a cohesive whole. (Feb.) Copyright 2008 Reed Business Information.

Q: How many pages? Just wondering how many pages are in this book? Sounds interesting, but the review was not great....

There are 95 pages of this book and seven introductory pages.

This book is written for adults, it will go over the heads of most children.

▼▲
I'm the author/artist and I want to review The Parables of Dr. Seuss.
Back
Back