Skip to main content
Get Christmas Ready Sale: Deals on over 1,150 titles thru 9/27.
The Oxford Companion to the Bible
Edited By: Bruce M. Metzger, Michael D. Coogan
Stock No: WW46455 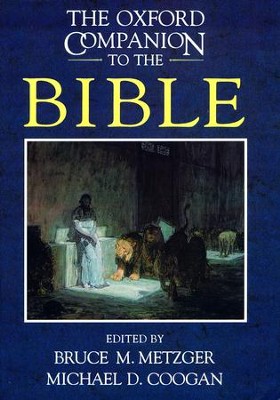 The Oxford Companion to the Bible

▼▲
Now you can have a wealth of biblical knowledge right at your fingertips! Written by over 250 scholars from 20 nations, this handy one-volume reference features more than 700 interpretive articles about the Bible's impact on the Western world---including its influence on music, art, law, religious rites, and much more! Includes 28 pages of color maps.

▼▲
The Bible has had an immeasurable influence on Western culture, touching on virtually every aspect of our lives. It is one of the great wellsprings of Western religious, ethical, and philosophical traditions. It has been an endless source of inspiration to artists, from classic works such as
Michaelangelo's Last Judgment, Handel's Messiah, or Milton's Paradise Lost, to modern works such as Thomas Mann's Joseph and His Brothers or Martin Scorsese's controversial Last Temptation of Christ. For countless generations, it has been a comfort in suffering, a place to reflect on the mysteries
of birth, death, and immortality. Its stories and characters are an integral part of the repertoire of every educated adult, forming an enduring bond that spans thousands of years and embraces a vast community of believers and nonbelievers.

The Oxford Companion to the Bible provides an authoritative one-volume reference to the people, places, events, books, institutions, religious belief, and secular influence of the Bible. Written by more than 250 scholars from some 20 nations and embracing a wide variety of perspectives, the
Companion offers over seven hundred entries, ranging from brief identifications--who is Dives? where is Pisgah?--to extensive interpretive essays on topics such as the influence of the Bible on music or law.

Ranging far beyond the scope of a traditional Bible dictionary, the Companion features, in addition to its many informative, factual entries, an abundance of interpretive essays. Here are extended entries on religious concepts from immortality, sin, and grace, to baptism, ethics, and the Holy
Spirit. The contributors also explore biblical views of modern issues such as homosexuality, marriage, and anti-Semitism, and the impact of the Bible on the secular world (including a four-part article on the Bible's influence on literature).

Of course, the Companion can also serve as a handy reference, the first place to turn to find factual information on the Bible. Readers will find fascinating, informative articles on all the books of the Bible--including the Apocrypha and many other ancient texts, such as the Dead Sea Scrolls,
Pseudepigrapha, and the Mishrah. Virtually every figure who walked across the biblical stage is identified here, ranging from Rebekah, Rachel, and Mary, to Joseph, Barabbas, and Jesus. The Companion also offers entries that shed light on daily life in ancient Israel and the earliest Christian
communities, with fascinating articles on feasts and festivals, clothing, medicine, units of time, houses, and furniture. Finally, there are twenty-eight pages of full-color maps, providing an accurate, detailed portrait of the biblical world.

A vast compendium of information related to scriptures, here is an ideal complement to the Bible, an essential volume for every home and library, the first place to turn for information on the central book of Western culture.

▼▲
Bruce M. Metzger is George L. Collord Professor Emeritus of New Testament Language and Literature, Princeton Theological Seminary. A recognised authority on the text of the New Testament, he was chairperson of the NRSV Bible Committee, which produced the New Revised Standard Version, and he was
co-editor (with Roland E. Murphy) of The New Oxford Annotated Bible.
Michael D. Coogan is Professor of Religious Studies at Stonehill College.

▼▲
I'm the author/artist and I want to review The Oxford Companion to the Bible.
Back
Back