Skip to main content
The Outlaw of Mars, Unabridged Audiobook on CD
By: Otis Adelbert Kline
Stock No: WW913488 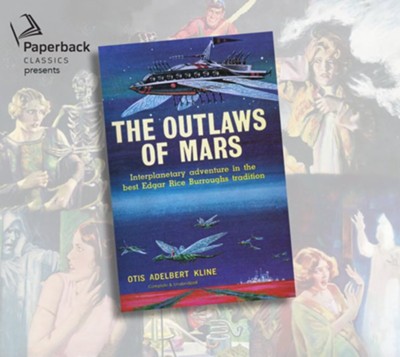 The Outlaw of Mars, Unabridged Audiobook on CD

▼▲
Jerry Morgan, a man with no future on Earth, is offered a new life on Mars. He starts out on the wrong foot, meeting a princess and killing the fearsome-looking Martian beast he takes to be menacing her, which actually turns out to be her pet. From there Morgan becomes entangled in the politics of the Byzantine Martian royal court, spurns the advances of a would-be lover, escapes his hosts and role as an expendable political pawn. Various adventures follow, with dazzling swordplay, feats of strength, and other trials, tribulations and treacheries.
Kline's Mars has multiple parallel canals, surrounded by walls and terraces, and the construction of the canals by Martian machines is described. The story has a race-war element that may jar the modern reader.

▼▲
Otis Adelbert Kline (July 1, 1891 – October 24, 1946) born in Chicago, Illinois, USA, was a songwriter[1], an adventure novelist and literary agent during the pulp era. Much of his work first appeared in the magazine Weird Tales. Kline was an amateur orientalist and a student of Arabic, like his friend and sometime collaborator, E. Hoffmann Price.

▼▲
I'm the author/artist and I want to review The Outlaw of Mars, Unabridged Audiobook on CD.
Back