Shipment delay - click here for more details
The Other Side of Christianity
By: Dallas M. Darling 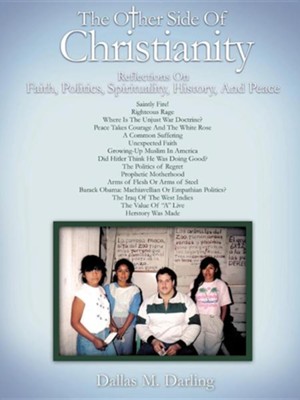 The Other Side of Christianity

▼▲
"You are at liberty to seek your own salvation as you understand it, provided you do nothing to change the social order," said Joseph Goebbels (Hitler's Propaganda Minister) to a group of clergy. The Other Side Of Christianity challenges this notion and the State Religion that is so often believed and practiced by unsuspecting Christians. At the same time, the author claims Jesus challenged societal norms and practiced civil disobedience by healing people on the Sabbath and ministering to the outcasts and forgotten. In the context of the Roman Empire, Jesus also proclaimed and lived a Gospel (good news) of justice, universal love and economic redistribution that was contrary to Caesar's Gospel (bad news) of inequality, imperialistic wars and greed. By using messianic nonviolence and revolutionary forgiveness, Jesus ushered in God's Reign overturning and transforming the Roman Empire's ideologies of retaliation, violence and dehumanization. Did Jesus command his disciples and followers to do the same? The Other Side Of Christianity explores this question (and many more) through fifty-two weekly scriptural readings and reflections based on faith, politics, history, peace, and spirituality. These innovative devotionals will challenge your faith, deepen your belief in God and broaden your journey with humankind. Fifty-Two Weekly Devotionals And Scriptural Readings From The Margins Of Christianity Including Ash Wednesday, Good Friday, Easter, Christmas, Independence Day, Indigenous Day/Thanksgiving Day, And Election Day

▼▲
I'm the author/artist and I want to review The Other Side of Christianity.
Back
×