Skip to main content
The Oracle: The Jubilean Mysteries Unveiled
By: Jonathan Cahn
Stock No: WW996295 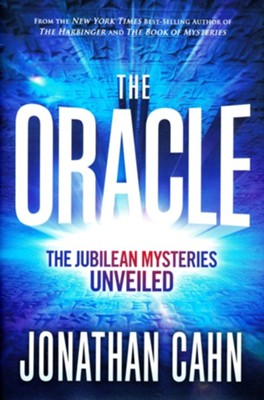 The Oracle: The Jubilean Mysteries Unveiled

The Oracle will reveal the mystery behind everything… the past, the present, currents events, even what is yet to come! Open the seven doors of revelation- And prepare to be blown away!

Jonathan Cahn, author of the New York Times bestsellers The Harbinger, The Mystery of the Shemitah, The Book of Mysteries, and The Paradigm, now unveils The Oracle, in which he opens up the Jubilean mysteries and a revelation so big that it lies behind everything from the rise and fall 4nhand empires (even America), to the current events of our aday, to the future, to end-time prophecy, and much more.

The reader will discover the ancient scrolls that contain the appointed words that have determined the course of world history from the onset of modren times up to our day. The revelation is so big that it will involve and open up the mysteries of everything and everyone from Mark Twain to Moses, from King Nebuchadnezzar to Donald Trump, from the fall of empires to the rise of America, from a mystery hidden in a desert cave to another in an ancient scroll, from the palace of the Persian Empire to the US Senate, from the Summer of Love to the Code of Babylon, and much, much more.

As with The Harbinger and The Book of Mysteries, Cahn reveals the mysteries through a narrative. A traveler is given seven keys; each will open up one of seven doors. Behind each doors lies a stream of mysteries. The reader will be taken on a journey of angels and prophetic revelations waiting to be discovered behind each of the seven doors-the ancient secrets that lie behind the world-changing events of modern times-and revelations of what is yet to come.

Hailed as a mind-blowing masterpiece, The Oraclewill reveal mysteries that are absolutely real, amazing, stunning, mind-blowing, and life-changing.

▼▲
I'm the author/artist and I want to review The Oracle: The Jubilean Mysteries Unveiled.
Back