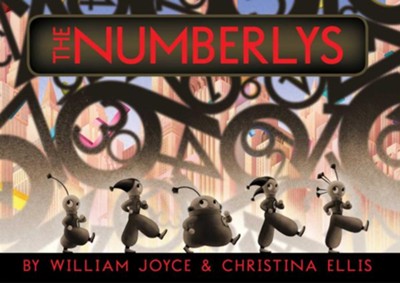 ▼▲
From the team who brought you The Fantastic Flying Books of Mr. Morris Lessmore comes an alphabet tale extraordinaire!

Once upon a time there was no alphabet, only numbers…

Life was…fine. Orderly. Dull as gray paint. Very…numberly. But our five jaunty heroes weren’t willing to accept that this was all there could be. They knew there had to be more.

So they broke out hard hats and welders, hammers and glue guns, and they started knocking some numbers together. Removing a piece here. Adding a piece there. At first, it was awful. But the five kept at it, and soon it was…artful! One letter after another emerged, until there were twenty-six. Twenty-six letters—and they were beautiful. All colorful, shiny, and new. Exactly what our heroes didn’t even know they were missing.

And when the letters entered the world, something truly wondrous began to happen…Pizza! Jelly beans! Color! Books!

Based on the award-winning app, this is William Joyce and Moonbot’s Metropolis-inspired homage to everyone who knows there is more to life than shades of black and gray.

▼▲
William Joyce does a lot of stuff but children’s books are his true bailiwick (The Guardians series, Dinosaur Bob series, George Shrinks, and the #1 New York Times bestselling The Fantastic Flying Books of Mr. Morris Lessmore, which is also his Academy Award–winning short film, to name a few). He lives in Shreveport, Louisiana. Talk to William Joyce and see upcoming work at @HeyBillJoyce on Twitter and Instagram.

Christina Ellis is an illustrator, telling fantastic stories through her characters and their worlds. Christina joined the legion of Moonbots after studying illustration at Ringling College of Art and Design. She lives in Shreveport, Louisiana, and The Numberlys is her picture book debut.

▼▲
I'm the author/artist and I want to review The Numberlys.
Back
×