Skip to main content
SPRING CYBER EVENT STARTS NOW: And it's a really BIG deal! Up to 88% off through 5/24>
The Noel Diary: The Noel Collection #1
By: Richard Paul Evans
Stock No: WW172038 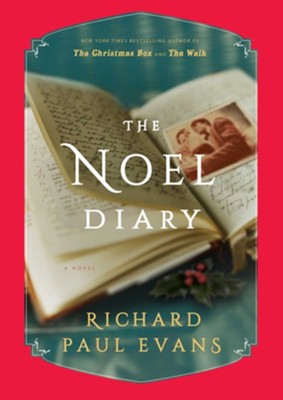 The Noel Diary: The Noel Collection #1

Jason Chercher's mother passed away and left him her home and belongings. While cleaning out her home, he finds the record of his childhood and learns that his mother was ill a lot of the time. A woman named Noel was living with his family and took care of him at the times of his upbringing when his mother was too ill to. He begins a mission to find Noel so he can learn more about his past.

In this holiday-themed novel from the #1 New York Times bestselling author of The Mistletoe Promise and The Walk, a man receives the best Christmas present he could ask for: the chance to rewrite the past.

Bestselling romance author Jacob Churcher hasn't been home for almost twenty years—not since his mentally ill mother kicked him out of the house when he was just sixteen. When a lawyer calls, days before Christmas, to inform him that his estranged mother has passed away and left her house to him, Jacob returns not just to settle the estate but to try and reconcile with the past and the pain and abuse he experienced as a child. Also, maybe cleaning out her house will be slightly less depressing than spending the holidays alone, watching re-runs of Christmas classics.

But as it turns out, the house holds more than just difficult memories, Jacob’s mother had become a hoarder and he must excavate through two decades worth of clutter. As Jacob digs through the detritus, like an archaeologist, he uncovers many puzzling items including a diary left by someone named Noel, a young woman he has no recollection of, who stayed with Jacob’s family during her pregnancy. That’s not the only echo from the past. Jacob has an unexpected visitor, Rachel, a woman looking for the mother who put her up for adoption thirty years before. United by their quest to make sense of the past and rewrite their futures, Jacob and Rachel begin a search for Noel. Along the way they find more than they possibly imagined, including grace, forgiveness and a chance at love.

▼▲
Richard Paul Evans is the #1 bestselling author of The Christmas Box. Each of his more than thirty-five novels has been a New York Times bestseller. There are more than thirty-five million copies of his books in print worldwide, translated into more than twenty-four languages. He is the recipient of numerous awards, including the American Mothers Book Award, the Romantic Times Best Women’s Novel of the Year Award, the German Audience Gold Award for Romance, five Religion Communicators Council Wilbur Awards, The Washington Times Humanitarian of the Century Award, and the Volunteers of America National Empathy Award. He lives in Salt Lake City, Utah, with his wife, Keri, and their five children. You can learn more about Richard on Facebook at Facebook.com/RPEFans, or visit his website RichardPaulEvans.com.

▼▲
Praise for THE MISTLETOE SECRET

"A sweet story of working through challenges to finding what seems like an elusive and impossible relationship. Evans also includes a cast of quirky and entertaining supporting characters."
—Deseret News

"Count me in."
—Charlotte Observer

"A great re-interpretation of a classic romance."
—Roswell Daily Record

"This novel fits beautifully with the holiday season as two people, both dealing with loneliness, find that love can be found in unexpected places, and it is worth the effort to find it."
—Dayton Daily News

"For a short and sweet seasonal read, pick up The Mistletoe Secret by Richard Paul Evans... Filled with holiday cheer, this story is marketed to audiences who enjoy Hallmark movies."
—St. Lawrence Plaindealer

▼▲
I'm the author/artist and I want to review The Noel Diary: The Noel Collection #1.
Back
Back