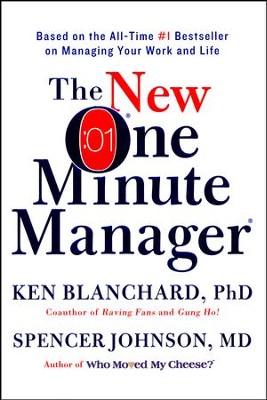 The New One Minute Manager

Based on the original book The One Minute Manager that helped millions of people around the world in organizations large and small, this new version of the classic story deals with a new world.

Concise and easy to read, the story reveals three very practical secrets: One Minute Goals, One Minute Praising’s, and One Minute Re-Directs, the new third secret. It is based on studies in the behavioral sciences and medicine that support why these simple methods work so well with so many people. You’ll discover new ways to help your organization adapt and prosper, find meaning in your work, and learn how to succeed sooner with less stress – both at work and at home.

Ken Blanchard, PhD, is one of the most influential leadership experts in the world. He has co-authored 60 books, including Raving Fans and Gung Ho! (with Sheldon Bowles). His groundbreaking works have been translated into over 40 languages and their combined sales total more than 21 million copies. In 2005 he was inducted into Amazon's Hall of Fame as one of the top 25 bestselling authors of all time. The recipient of numerous leadership awards and honors, he is cofounder with his wife, Margie, of The Ken Blanchard Companies®, a leading international training and consulting firm.

Spencer Johnson, MD, is one of the most admired thought leaders and widely read authors in the world. His books, including the #1 bestseller Who Moved My Cheese?, are embedded in our language and culture. Called "The King of Parables" by USA Today, Dr. Johnson is often referred to as the best there is at taking complex subjects and presenting simple solutions that work. His brief books contain insights and practical tools that millions of people use to enjoy more happiness and success with less stress. Over 50 million copies of Spencer Johnson's books are in use worldwide in 47 languages.

▼▲
I'm the author/artist and I want to review The New One Minute Manager.
Back
×
Back
×