The New Guidebook for Pastors
By: Mac Brunson, James Bryant
Stock No: WW444290 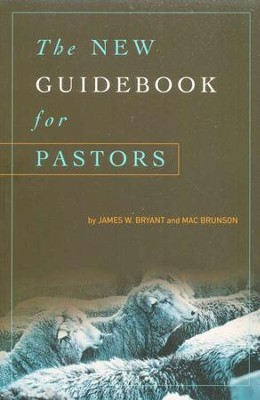 The New Guidebook for Pastors

▼▲
Senior Professor Jim Bryant (Criswell College) and Senior Pastor Mac Brunson have compiled a guidebook in the tradition of W.A. Criswell's Guidebook for Pastors (1980). Their purpose and desire was to create a work that is relevant to the postmodern twenty-first century milieu in which pastors find themselves. It is a text which covers a breadth of topics and circumstances a pastor faces throughout his or her ministry.

The New Guidebook for Pastors

is written in the tradition of classics like Criswell’s Guidebook for Pastors. But since most pastoral guidebooks available today date back to 1980 or earlier, this new resource by Mac Brunson and James W. Bryant will offer fresh experience-based encouragement to all pastors in their pursuit of excellence and development in their God-called profession.

Tell us a little about yourself.  I am a native of Atlanta, Georgia. I graduated from Wheaton College in 1958. I was ordained to the Gospel Ministry in 1959. I hold two degrees, the Master of Divinity and the Doctor of Theology from Southwestern Baptist Theological Seminary in Fort Worth, Texas. I have been preaching since I was 16 and served at a pastor or an assistant pastor in churches in Georgia, Texas, New Mexico, and Arkansas. I have served as the President of Luther Rice Seminary in Atlanta, and Vice President for Academic Affairs at Criswell College in Dallas, Texas. Since 2004 I have been in the classroom as Senior Professor of Pastoral Theology at Criswell. Ruby and I have been married since 1959. We have two sons and two grandchildren.

What was your motivation behind this project?  The publishers were talking with Mac and me about revising Dr. Criswell's guidebook, published by them in 1980. Mac and I decided to write our own. Both of us saw the need for pastors to have a new guidebook that was up-to-date and was reached a balance between the spiritual and the practical.

What do you hope folks will gain from this project?  This book was written to guide pastors from the time they first acknowledge a call of God to preach until they go to their reward in heaven. There is an intergenerational uniqueness about the book in that the co-author, Mac Brunson, was a member of my church in Fort Worth, Texas when he was a seminary student back in the 1980's. Then he became my pastor at First Baptist Church of Dallas, Texas when I moved back to teach at Criswell College. No similar guidebook has been published by Baptist authors since 1980. The 14 appendices (not shown in the Table of Contents on line) cover practical subjects such as: What to Do if You Are Fired; Where Does a Pastor Go for Counseling; How to Build a Preaching Library; and How to Give an Invitation in a Public Service, just to mention a few. In these appendices web sites are given to add to the richness of pastoral resources found in the extensive bibliography. The book would be a great gift for laymen to give to their pastors, for pastors to give to young men called to preach, and, because of the documentation, could be used as a textbook in Pastoral Ministry courses. Several seminary professors have already indicated they will use it as a textbook. May God bless it in the lives and ministries of many pastors and church staff members through the years!

Who are your influences, sources of inspiration or favorite authors / artists?  The book is patterned after W. A. Criswell's guidebook for pastors published in the 1980's. I worked for Dr. Criswell in the late 1960's and early 1970's before becoming a pastor myself.

Anything else you'd like readers / listeners to know:  Both of the authors are committed to expository preaching and seek to relate that commitment in each chapter. Although we both are Southern Baptists, the book is written for any evangelical minister. In other words, the book is trans- denominational.