Shipment delay - click here for more details
The Need & the Blessing of Prayer
By: Karl Rahner 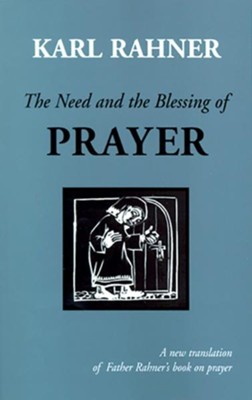 The Need & the Blessing of Prayer

▼▲
As all the great theologians, Father Rahner ws also a master of the spritual life and of prayer. This book is an eloquent proof of that. With theological passion, spiritual intensity, and the infectious power of igniting, thought, Rahner opens up a creative new understanding of prayer.

A new translation of Father Rahner's book on prayer.

Karl Rahner stands in a long line of great Christian theologians who were likewise great teachers of prayer. He has been called the voice of Vatican II, and is acknowledged as the rare theologian whose writings speak to the ordinary" Christian.

In The Need and the Blessing of Prayer , Father Rahner views the human person as essentially one called to prayer. He also highlights prayer as the act of human existence, the great religious act. By encouraging people to "pray in the everyday" - to pray regardless of the desire or mood of the moment - Rahner's theology of the prayer of everyday life challenges us to surrender ourselves to God so that God dwells at the very center of our lives.

The eight chapters of The Need and the Blessing of Prayer were originally sermons that Rahner gave during Lent 1946 at St. Michal's Church in Munich, Germany. This work has been reprinted often throughout its thirty-year history, testifying to its enduring message. For as Father Rahner wrote in the first edition, "If we are not supposed to cease praying, then perhaps one shouldn't cease speaking about prayer."

▼▲
I'm the author/artist and I want to review The Need & the Blessing of Prayer.
Back
×