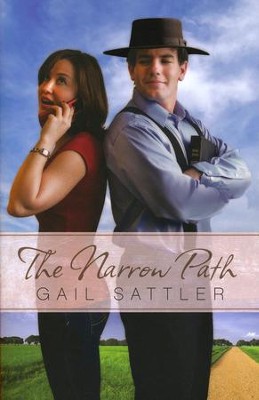 ▼▲
Miranda Klassen's Mennonite church is big and modern and she loves the mixture of faith, action, and activity. But in order to follow her dream she moves across the country to a small town to organize the 25th anniversary celebration of an Old Order Mennonite church. Ted Wiebe has been assigned to assist and guide Miranda, feeling good that his church has chosen another Mennonite. But except for sharing the same basic faith and denomination, their churches have nothing else in common. His church embraces old-style roots, so Ted expects to find someone similar at the airport: a woman who never wears pants, no body piercing (including pierced ears), no makeup, and wearing a head covering as a sign of modesty, someone else who lives in accordance with old-fashioned values. But the woman who acknowledges him is wearing unreasonably high and outlandishly expensive shoes, denim jeans, and makeup, including bright red lipstick. As she gets off the plane she's fiddling with an iPod and yapping on the cell phone. When Miranda enters Ted's church and community she feels like she's been transported back into Little House On The Prairie. Ted is supposed to help Miranda fit in, and Miranda is supposed to help his church reach out into the community. When it's time to start planning and organizing for the celebration, then the fun really begins.

▼▲
Gail Sattler is the author of numerous novels, novellas, gift books, cookbooks and devotions. She is a longstanding member of East Ridge Community Fellowship, a Mennonite Brethren church. She lives and writes in Vancouver, B.C., Canada. For more information about Gail, check out her websites at GailSattler.com and MennoniteRomanceNovel.com.

▼▲
In The Narrow Path by Gail Sattler, Mirada Klassen and Ted Wiebe may both be Mennonite believers walking on the narrow road to the Lord, but their similarities stop there. Whereas Mirada is from the city and used to efficient digital communication, speedy transportation, and even faster venti mochas, Ted is traditional in every sense. When Miranda is recruited to write, cast, and lead a Christmas musical for the Old Order Mennonite church in Minnesota, Ted, as the worship minister, begrudgingly works with her. Each is comfortable in his or her ways, but must work together to accomplish their ultimate goals, and in the process perhaps learn more about each other then they thought possible.

Chapter one is headed by the verse Matthew 7:14, But small is the gate and narrow the road that leads to life, and only a few will find it. Sattler carefully crafts the Mennonites lifestyle in the book through everything from the way they speak to the types of foods they eat. Although she contrasts the Christians who literally separate themselves from the world, and Christians who live among the world and its ways but are still set apart, she unites them as one in Christ. Despite the fact that tradition and daily life may be different for believers, a beautiful unity exists in God.

The major flaw in The Narrow Path is in the storytelling itself. Although there is an overarching conflict of Miranda and Teds lives colliding, there are really no conflicts to keep the reader turning pages, and the major crisis arises out of an obscure part of the story that didnt allow time for the reader to become emotionally involved due to lack of background and rising tension. Also, many times there are unnecessary sections of the book that dont add anything to the plot itself, such as local customs, church history, or random descriptions of country life.

However, despite the lack of a unified and complete story, Sattlers characters are loveable, fun, and memorable, and her quick wit and knack for good descriptions will keep her readers smiling. Most pre-teens, teens, and young women in search of a light-hearted romance with a good message will appreciate The Narrow Path.  Emily Jean Morgan, www.ChristianBookPreviews.com

▼▲
Sattler (Hearts in Harmony) offers her large fan base a story where unlike meets dislike. Although both Miranda Klassen and Ted Wiebe are part of the Mennonite church, these two young adults couldn't be any different. Inside out and outside in, Miranda and Ted look different (she's modern, he's Old Order conservative) and think different (she's into electronic gadgets, he's into plain and simple). Thrown together when Miranda is hired to organize Ted's Old Order Mennonite church's anniversary celebration, each balks at the other's mode of living. Once Ted gets past Miranda's red earrings, insanely high heels, and cellphone, and sees her heart for God, things begin to thaw between the two. With a bevy of delightful characters, Sattler takes what could be just another toss 'em together and it will all work out in the end faith-based romance and makes it something more, much more. Winsome and warm, this story tickles the funny bone and teases the heart in equal measure. (May) Copyright 2010 Reed Business Information.

▼▲
I'm the author/artist and I want to review The Narrow Path.
Back
Back