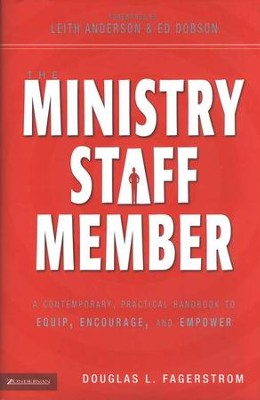 ▼▲
Provide counsel and direction for church associates with this practical guide. Topics covered include knowing your job, embracing your servant-leader role, serving responsibly, getting along with others, living a balanced life, and avoiding things that get in the way. A perfect reference tool for in-service training, seminary interns, and new employee orientation. 272 pages, hardcover from Zondervan.

"When are you going to become a real pastor?" "When are you going to get your own church?" "How long will you be here?" During his thirty-one years serving in churches across the country, Doug Fagerstrom has both known the joys of being a ministry staff member and experienced many misconceptions of the role. In The Ministry Staff Member, he draws on his vast experience to correct false notions and provide a clear, accurate understanding. This comprehensive and practical handbook provides staff members—paid and volunteer, church and parachurch—with invaluable tools for success and helps those around them to better understand and appreciate the importance of what they do. Dozens of sidebar articles and suggested resource lists provide a useful toolbox you’ll want to turn to again and again.

▼▲
I'm the author/artist and I want to review The Ministry Staff Member.
Back
Back