Skip to main content
The Message of 1 & 2 Thessalonians: The Bible Speaks Today [BST]
Edited By: John Stott
By: John Stott
Stock No: WW1237 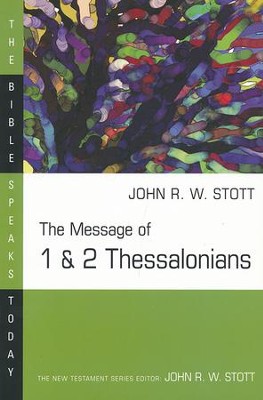 The Message of 1 & 2 Thessalonians: The Bible Speaks Today [BST]

▼▲
Newly planted, the Thessalonian church grew in strength as it spread the gospel in the surrounding area. But some theological and moral problems also grew. To build up and correct these believers Paul addressed many issues which concern Christianas today. With scholarly rigor and pastoral care, John Stott opens up these important letters to us in a way that will enlighten our minds, encourage our hearts, and lift our souls to worship the God of the gospel and of time. John Stott is the editor of this series. He was rector of All Souls Church in London for twenty-five years and is a well-loved writer and speaker.

▼▲
Digging into Paul's letters to the Thessalonians, John R. W. Stott addresses issues of vital importance today: Originally published as The Gospel the End of Time, Stott's comments on 1 and 2 Thessalonians are now available in paperback as a new addition to the Bible Speaks Today series.

▼▲
John R. W. Stott (1921-2011) has been known worldwide as a preacher, evangelist and communicator of Scripture. For many years he served as rector of All Souls Church in London, where he carried out an effective urban pastoral ministry. Stott was honored by magazine in 2005 as one of the "100 Most Influential People in the World." His many books, including , and eight volumes in the Bible Speaks Today series, have sold millions of copies around the world and in dozens of languages. Whether in the West or in the Two-Thirds World, a hallmark of Stott's ministry has been expository preaching that addresses the hearts and minds of contemporary men and women.

▼▲
I'm the author/artist and I want to review The Message of 1 & 2 Thessalonians: The Bible Speaks Today [BST].
Back
Back