Skip to main content
BIBLE SALE OF THE SEASON: For a Limited Time ~ Save on over 1,100 Bibles!
The Message of Exodus: The Bible Speaks Today [BST]
Edited By: J.A. Motyer
By: J.A. Motyer
Stock No: WW24272 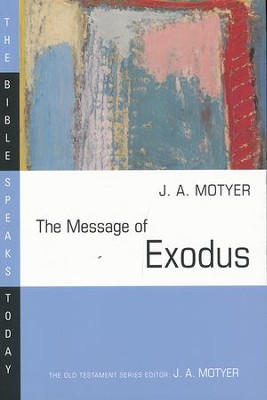 The Message of Exodus: The Bible Speaks Today [BST]

▼▲
The Book of Exodus holds an esteemed place in the Old Testament, and the shadow of its influence reaches as far as Revelation, where an abundance of themes from Exodus echo off its pages. In Exodus, Israel begins as an enslaved people, in service to Egyptian taskmasters. By the end of the book, Israel is again in service--to its sovereign Lord in the service of worship. Between these poles, Moses is called, God's name is revealed, Israel is delivered, the law is given, the plan of the tabernacle is unveiled, and all is nearly lost when Israel rebels in the wilderness. It is an epic saga, and in it lies the key to understanding so much of the Bible. Under Alec Motyer's expert guidance, we explore the terrain of Exodus, weigh its themes and view our own lives and times through its timeless lens.

When the Lord promised the land of Canaan to Abram and his descendants (Gen 15:7), every part of it was already occupied by other peoples. The long journey to possession of the Promised Land was prepared by God, yet it led through a path of adversity. We, the readers of the Old Testament, are left to wonder why. In this engaging Bible Speaks Today commentary on Exodus, J. Alec Motyer explores the character of God through his covenant promises and persistent faithfulness to the people of Israel. Through the story of Israel we are exposed to an unquenchable fire: God the Savior, the Companion and the Indweller, who will not fail those who so often fail him.

J. A. Motyer was formerly principal of Trinity College, Bristol, in England. Author of The Prophecy of Isaiah, he has also contributed The Message of Amos, The Message of Philippians and The Message of James to The Bible Speaks Today series.

"Motyer is largely successful in making the book of Exodus speak today. Motyer has clearly grappled with the Hebrew text in preparing his expositions, and thus his expositions are grounded on a scholarly analysis of the text."

▼▲
I'm the author/artist and I want to review The Message of Exodus: The Bible Speaks Today [BST].
Back
Back