The Message of Daniel: The Bible Speaks Today [BST]
By: Dale Ralph Davis 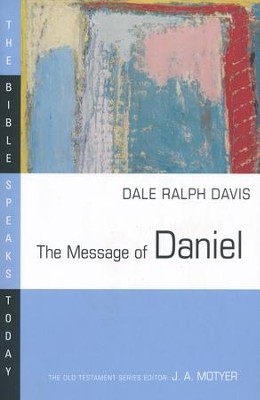 The Message of Daniel: The Bible Speaks Today [BST]

▼▲
God had allowed the unthinkable to happen. His people were in exile in Babylon; his promises seemed shattered. Was he really in control? Was he faithful? Did he still care? One young man, Daniel, affirmed God's sovereignty and love, although it was not without cost.

The Old Testament book of Daniel contains well-known stories Daniel in the den of Lions, his three companions in a fiery furnace, and the strange handwriting on the wall at Belshazzar's feast, which struck terror in the heart of the Babylonian king. However, Daniel's enigmatic visions and prophecies about the future can be difficult to understand.

Dale Ralph Davis explores the book's background, discusses significant interpretive issues and problems, and offers a lively exposition of Daniel's message, which may be summed up in the words of Jesus: "the end is not yet. but the one who endures to the end will be saved". The book of Daniel is a realistic survival manual for the saints, still vitally relevant for the church in today's world.

▼▲
From former pastor and professor Dale Ralph Davis, this replacement volume in the Bible Speaks Today Old Testament commentary series offers a reliable exposition of the visionary book of Daniel for pastors and lay commentary readers. Explaining the background to Daniel, he sifts through interpretive issues and then offers a faithful exposition of the book's message.

▼▲
Dale Ralph Davis is former pastor of Woodland Presbyterian Church in Hattiesburg, Mississippi, and professor of Old Testament at Reformed Theological Seminary in Jackson. He now lives in rural Tennessee and is the author of many books, including an expository study of Judges and

▼▲
"Here is a fine volume on Daniel by Dale Ralph Davis, who is simply one of the best writers today on any Old Testament historical portion, in the Bible Speaks Today series. Helpful in the ways usually found in this series, this volume is also particularly so for preachers. . . .The book is enriching and I highly recommend it."
"This is a commentary that serves both the laity and preachers. Davis doesn't load the text with too many technical points but allows for a good flow for reading. He retains the technical elements but keeps them in the footnotes. It definitely serves as a wonderful entry point into the book of Daniel."
"Davis, obviously a capable preacher, explains the background to Daniel, sifts through interpretive issues (some of them quite problematic) and then offers a faithful exposition of the book's message. Recommended."

▼▲
I'm the author/artist and I want to review The Message of Daniel: The Bible Speaks Today [BST].
Back
×
Back
×