Skip to main content
The Meaning of the Millennium
Edited By: Robert G. Clouse
By: George Eldon Ladd, Herman A. Hoyt, Loraine Boettner, Anthony A. Hoekema
Stock No: WW47940 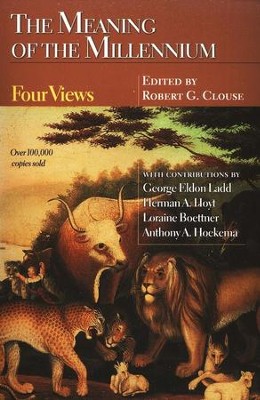 The Meaning of the Millennium

▼▲
Prof Clouse has brought together four proponents of the four major millennial views:each view has had both a long history and a host of Christian adherents through the years. George Ladd presents historic premillennialism. Hoyt writes on dispenstional premillennialism. Boettner retired theologian discusses the postmillennial view. And finally Hoekema describes the amillennial position. After each essay the other three writers respond from their own perspective. This book is a debate among key Christian scholars on the meaning of the millennium.

Since the first century, Christians have agreed that Christ will return. But since that time there have also been many disagreements. How will Christ return? When will he return? What sort of kingdom will he establish? What is the meaning of the millennium? These questions persist today.

Four major views on the millennium have had both a long history and a host of Christian adherents. In this Spectrum Multiview volume Robert G. Clouse brings together proponents of each view: George Eldon Ladd on historic premillenniallism, Herman A. Hoyt on dispensational premillennialism, Loraine Boettner on post-millennialism and Anthony A. Hoekema on amillennialism.

After each view is presented, proponents of the three competing views respond from their own perspectives. Here you'll encounter a lively and productive debate among respected Christian scholars that will help you gain clearer and deeper understanding of the different ways the church approaches the meaning of the millennium.

Robert G. Clouse (Ph.D., University of Iowa) is professor emeritus of history at Indiana State University in Terre Haute, Indiana. He is also an ordained Brethren minister and has served churches in Iowa and Indiana. He is coeditor (with Bonnidell Clouse) of Women in Ministry and is author or coauthor of several books including The New Millenium Manual, Two Kingdoms and Puritans, the Millenium and the Future of Israel.


Ladd, professor of New Testament exegesis and theology at Fuller Theological Seminary since 1950, was educated at Gordon College and Gordon Divinity School (B.D.) and received the Ph.D. from Harvard University. He also did postdoctoral study at Heidelberg and Basel Universities. Ordained as an American Baptist minister, Ladd served several churches in the denomination. He was professor of Greek at Gordon College (1942-45) and head of the department of New Testament at Gordon Divinity School (1946-50). His writings include Crucial Questions about the Kingdom of God (1952), The Blessed Hope (1956), The Gospel of the Kingdom (1959), Jesus Christ and History (1963), The New Testament and Criticism (1965), The Pattern of the New Testament (1968), Commentary on The Revelation (1972) and The Theology of the New Testament (1974).


Hoyt (A.B., B.D., M.Th., Th.D., LL.D.) was chancellor and professor of Christian theology at Grace Theological Seminary and Grace College in Winona Lake, Indiana. He wrote The End Times (1969) and several other books. He also contributed to a number of national Christian periodicals.


Boettner is a graduate of Princeton Theological Seminary (Th.B., 1928; Th.M, 1929), where he studied systematic theology under Dr. C. W. Hodge. In 1933 he received the Doctor of Divinity, and in 1957 the Doctor of Literature. He taught the Bible for eight years at Pikeville College (Kentucky). His books include The Reformed Doctrine of Predestination (1932), Studies in Theology (1947), Immortality (1956) and Roman Catholicism (1962).


Hoekema emigrated from the Netherlands to the United States in 1923. He attended Calvin College (A.B.), the University of Michigan (M.A.), Calvin Theological Seminary (Th.B.) and Princeton Theological Seminary (Th.D., 1953). After serving as minister of several Christian Reformed churches (1944-56) he became associate professor of Bible at Calvin College and later professor of systematic theology at Calvin Theological Seminary. He wrote The Four Major Cults (1963), What about Tongue-Speaking? (1966), Holy Spirit Baptism (1972), The Christian Looks at Himself (1975) and The Bible and the Future (1979).

"This work is an excellent introduction to the discussion as well as a pointer to additional works on the subject."

"A stimulated debate and an excellent learning tool . . . . The book opens a fresh and fruitful dialogue."

"Congratualtions to IV Press and to editor Clouse for bringing together the most adequate dialogue yet, on the divergent eschatological understandings found in modern evangelicalism."

▼▲
I'm the author/artist and I want to review The Meaning of the Millennium.
Back
Back