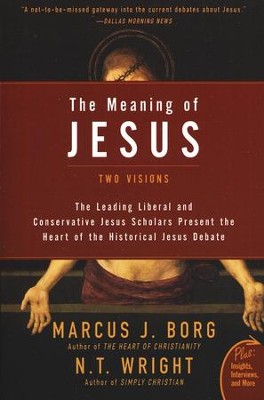 The Meaning of Jesus: Two Visions

▼▲
The authors' address their work to three groups of people. "First, we hope that those who would not call themselves Christians will find the conversation interesting and refreshing....Second, we hope to shift logjammed debates into more fruitful possibilities. Much current writing about Jesus falls into rather sterile either-or distinctions....we hope that this book will serve as a bridge between many other groups of Christians....Third, we hope to open up more specifically the perennially important question of how different visions of Jesus relate to different visions of the Christian life. Many who are deeply concerned with issues of justice, spirituality, pastoral care, and other matters within the churches do not always relate these issues to the question of Jesus. We propose some ways in which this might be done." No small feat, but if any are equipped to tackle this momentous task, it is outstanding scholars such as Wright and Borg.

Was Jesus born of a virgin? Did he know he was the Messiah? Was he bodily resurrected from the dead? Did he intentionally die to redeem humankind? Was Jesus God? Two leading Jesus scholars with widely divergent views go right to the heart of these questions and others, presenting the opposing visions of Jesus that shape our faith today.

N. T. Wright is the former bishop of Durham in the Church of England and one of the world's leading Bible scholars. He is now serving as the Chair of New Testament and Early Christianity at the School of Divinity at the University of St. Andrews. For twenty years he taught New Testament studies at Cambridge, McGill, and Oxford Universities, and he has been featured on ABC News, Dateline, The Colbert Report, and Fresh Air. Wright is the award-winning author of Surprised by Scripture, The Case for the Psalms, How God Became King, Simply Jesus, After You Believe, Surprised by Hope, Simply Christian, Scripture and the Authority of God, The Meaning of Jesus (coauthored with Marcus Borg), as well as being the translator for The Kingdom New Testament.

▼▲
N.T. Wright is Bishop of Durham for the Church of England and the author of numerous books, including Simply Christian: Why Christianity Makes Sense.

▼▲
I'm the author/artist and I want to review The Meaning of Jesus: Two Visions.
Back
Back