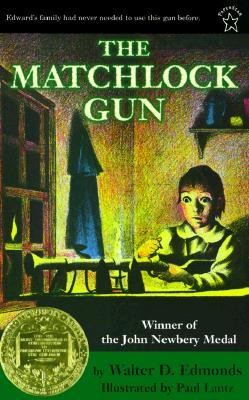 In 1756, New York State was still a British colony, and the French and the Indians were constant threats to Edward and his family. When his father was called away to watch for a raid from the north, only Edward was left to protect Mama and little Trudy. His father had shown him how to use the huge matchlock gun, an old Spanish gun that was twice as long as he was, but would Edward be able to handle it if trouble actually came? This classic, first published in 1941, has an updated, kid-friendly format that includes the original black-and-white illustrations.

▼▲
Walter D. Edmonds was born in 1903 in New York state. His 1936 novel, Drums Along the Mohawk, was a bestseller for two years. His later works received major literary awards, including the National Book Award and the Newbery Medal. He died in 1998.

▼▲
I'm the author/artist and I want to review The Matchlock Gun.
Back