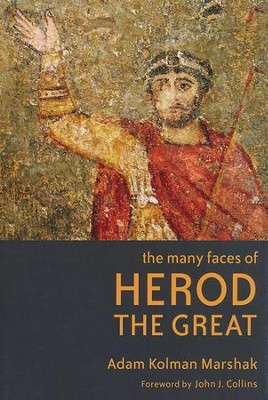 The Many Faces of Herod the Great

An old, bloodthirsty tyrant hears from a group of Magi about the birth of the Messiah, king of the Jews. He vengefully sends his soldiers to Bethlehem with orders to kill all of the baby boys in the town in order to preserve his own throne. For most of the Western world, this is Herod the Great - an icon of cruelty and evil, the epitome of a tyrant.

Adam Kolman Marshak portrays Herod the Great quite differently, however, carefully drawing on historical, archaeological, and literary sources. Marshak shows how Herod successfully ruled over his turbulent kingdom by skillfully interacting with his various audiences - Roman, Hellenistic, and Judaean - in myriad ways. Herod was indeed a master in political self-presentation.

Marshak's fascinating account chronicles how Herod moved from the bankrupt usurper he was at the beginning of his reign to a wealthy and powerful king who founded a dynasty and brought ancient Judaea to its greatest prominence and prosperity.

▼▲
Adam Kolman Marshak holds a Ph.D. in ancient history from Yale University. He has written extensively on Herod and the Herodian dynasty.

Tessa Rajak
— University of Reading
"This substantial and exceptionally well-documented study of Herod the Great will be for a good long time the basic resource for English readers on the grim but brilliantly successful monarch who was one of the shapers of world history. There is no doubt that it is a needed book. .—.—. Adam Kolman Marshak shuttles with the ease and assurance of an expert Roman historian between ground level and the bigger picture, carrying the reader with him all the way."

Donald T. Ariel
— Israel Antiquities Authority
"Applying the valuable reference point of self-presentation to Herod, the famous king of Judaea, Marshak has created an excellent vehicle to more fully understand the larger-than-life man in all of his complexity. In this biography we come to appreciate how Herod navigated in his Roman, Hellenistic, and Jewish worlds."

Achim Lichtenberger
— Ruhr University Bochum
"A clear and well-written analysis of Herod's dynamic career, his politics, and his self-representation as a Jewish, Hellenistic, and Roman king. Marshak encompasses all aspects and sources, from texts to architecture to coins. This comprehensive book presents Herod as a model of a client king in the Augustan principate."

Benedikt Eckhardt
— University of Münster
"Writing the history of Herod the Great is not an easy task. Scholars are confronted with a hostile literary tradition and a complex historical background. Marshak meets the various challenges with aplomb. . . . An important contribution both to historical scholarship on Judaea and to more general debates on the art of government."

John J. Collins (from the foreword)
— Yale Divinity School
"A fine contribution not only to the history of Judaea but also to the study of Roman client kingship, and indeed to ancient politics, which have lost none of their relevance in the modern world."

Methodist Recorder
"For readers of the New Testament, this study provides much fascinating background detail. . . . A fine study."

▼▲
I'm the author/artist and I want to review The Many Faces of Herod the Great.
Back
×
Back
×