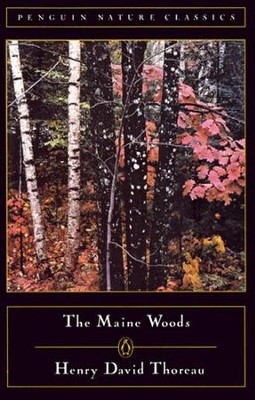 ▼▲
"What a wilderness walk for a man to take alone!...Here was traveling of the old heroic kind over the unaltered face of nature." -Henry David Thoreau

Over a period of three years, Thoreau made three trips to the largely unexplored woods of Maine. He climbed mountains, paddled a canoe by moonlight, and dined on cedar beer, hemlock tea and moose lips. Taking notes constantly, Thoreau was just as likely to turn his observant eye to the habits and languages of the Abnaki Indians or the arduous life of the logger as he was to the workings of nature. He acutely observed the rivers, lakes, mountains, wolves, moose, and stars in the dark sky. He also told of nights sitting by the campfire, and of meeting men who communicated with each other by writing on the trunks of trees. In The Maine Woods, Thoreau captured a wilder side of America and revealed his own adventurous spirit.

Edward Hoagland's books include The Courage of Turtles, Walking the Dead Diamond River, Red Wolves and Black Bears, and Notes from the Century Before: A Journal from British Columbia.

▼▲
I'm the author/artist and I want to review The Maine Woods - eBook.
Back
×
Back
×