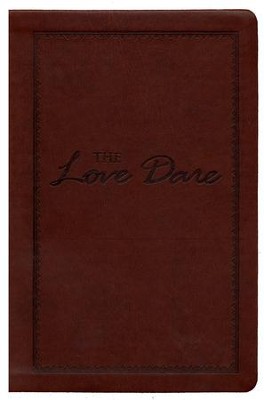 ▼▲
Whether your marriage is hanging by a thread or healthy and strong, this 40-day journey challenges both husbands and wives to understand and practice unconditional love. If you desire greater intimacy, friendship, and fulfillment in your marriage, let it begin where millions of others have started. With a dare.

Now featuring revised chapters, new bonus material, and access to a free marriage evaluation tool, this is the best Love Dare experience ever!

Unconditional love is eagerly promised at weddings, but rarely practiced in real life. As a result, romantic hopes are often replaced with disappointment in the home. But it doesn’t have to stay that way.

The Love Dare, the New York Times No. 1 best seller that has sold five million copies and was major plot device in the popular movie Fireproof, is a 40-day challenge for husbands and wives to understand and practice unconditional love. Whether your marriage is hanging by a thread or healthy and strong, The Love Dare is a journey you need to take. It’s time to learn the keys to finding true intimacy and developing a dynamic marriage.

This second edition also features a special link to a free online marriage evaluation, a new preface by Stephen and Alex Kendrick, minor text updates, and select testimonials from The Love Dare readers. Take the dare!

▼▲
Stephen Kendrick is best known as a screenwriter and movie producer (Facing the Giants, Fireproof, Courageous) along with having co-wrote the New York Times best sellers The Resolution for Men and The Love Dare with his brother, Alex. Stephen and his wife, Jill, have six children, and he serves as senior associate pastor of preaching and prayer at Sherwood Baptist Church in Albany, Georgia.
Alex Kendrick is best known as an actor, writer, and director whose film credits include Facing the Giants, Fireproof, and Courageous. He and his wife, Christina, have six children.  He also serves as associate pastor of movie outreach for Sherwood Baptist Church.

▼▲
I'm the author/artist and I want to review The Love Dare, Imitation Leather Edition.
Back
Back