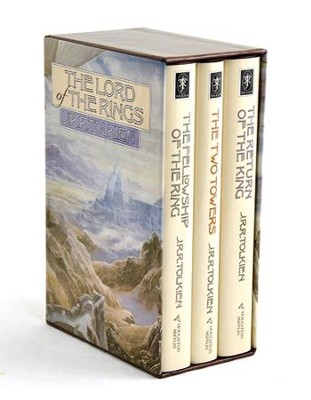 The Lord of the Rings, 3 Volume Hardcover Boxed Set

▼▲
The Trilogy of the Lord of the Rings set includes The Fellowship of the Ring, The Two Towers, and The Return of the King. This fantasy series takes place in Middle Earth, where three rings were made for the elves, seven for the dwarves, and nine made for men. However, the dark lord Sauron of Mordor made one ring that could command them all. If the one ring is returned to Saron, the whole of Middle Earth will be at his mercy.

The Fellowship of the Ring sets the pace of the trilogy, beginning in the Shire, where Bilbo Baggins hands over the ring to Frodo. Frodo is handed a quest to destroy the ring by the wizard Gandolf, and on his journey is accompanied by his hobbit friends, the man Aragorn, the dwarf Gimli, and the elf Legolas.

In The Two Towers, characters are divided into different plots. While Merry and Pippin battle orcs and convince the Ents to join their cause, others fight battles with magic and swords, Frodo and Sam continue their journey and discover a treacherous guide in Gollum.

The Return of the King is the dramatic conclusion to the trilogy, in which Frodo and Sam come face to face with the ultimate temptation and barely escape with their lives. In the ultimate battle of good and evil, the one true King finally emerges.

▼▲
The three volumes that make up Tolkien's epic classic The Lord of the Rings are here presented in their standard cloth editions including large format fold-out maps and an extensive appendices. Set contains The Fellowship of the Ring, The Two Towers, and The Return of the King, with jackets and a box designed by celebrated illustrator Alan Lee.

▼▲
J.R.R. TOLKIEN (1892–1973) is the creator of Middle-earth and author of such classic and extraordinary works of fiction as The Hobbit, The Lord of the Rings, and The Silmarillion. His books have been translated into more than fifty languages and have sold many millions of copies worldwide.

▼▲
"A unique, wholly realized other world, evoked from deep in the well of Time, massively detailed, absorbingly entertaining, profound in meaning." The New York Times

▼▲
I'm the author/artist and I want to review The Lord of the Rings, 3 Volume Hardcover Boxed Set.
Back
Back