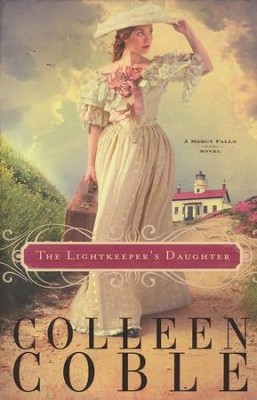 ▼▲
When Addie accepts a nanny job at ritzy Eaton Hall in 1907 California, she hopes to discover the truth about her family heritage. But she soon realizes that what she learns could rob the man she loves of his dream---and his right to the wealth and power of the Eaton name. Should she stay silent? 320 pages, softcover from Nelson.

With the lies of the past behind her, Addie finds love . . . and discovers her true Father.

Addie Sullivan leads a quiet life in a northern California lighthouse. She mourns the death of her father and endures her mother's bitterness, until the night a storm brings an injured stranger and a dark secret to her home. The man insists she is not who she thinks she is, but rather "Julia Eaton"—the child long lost and feared dead by her wealthy family. Seizing the chance to be reunited with the
Eatons, Addie leaves her lighthouse home but decides to keep her true identity a secret until they can unravel the mystery.

Addie loves the Eatons' palatial home tucked away among the California redwood forests. She feels secure with the jovial family, adores the young boy who is her charge as governess, and finds romance with his father John, a young widower. But sinister shadows overtake Addie's joy. As dusty rooms and secret compartments give up their clues about her past, Addie finds a faith and a love she could never have guessed. To embrace this new world of promise is to risk her life; but to run away is to risk losing the greatest love she's ever known.

▼▲
A traditional Christian romance, The Lightkeepers Daughter by Colleen Coble follows a heroine searching for an identity she will only find in Christ and in the man God provides for her. Addie Sullivan, the compassionate yet animated and bold daughter of the keeper of a lighthouse, has searched for love since her father died years ago, a love her mother never provided. A new horizon dawns, however, when a stranger appears, claiming Addie as his long-lost relative and the daughter of a rich man. The revelation hurdles Addie into a search for the truth of her past, a search that leads to shocking twists and deceiving characters.

Meanwhile, Addie takes on a position with Lieutenant John North, hiding her true identity until she can find solid proof for her heritage. The world of the rich far surpasses and differs from the simple light-keeping world Addie is accustomed to. Addie must guard against pressure to change herself for her new family as John falls in love with Addie, the sister of his former wife.

Coble does a wonderful job with plot twists, weaving in the unexpected and deceiving her readers with villains disguised as heroes. Addie and John fall in love at first sight, and while John suspects Addie has a secret, his relationship with Addie comes on far too fast. Coble gives her readers little reason to think of the romance as more than infatuation. Also, Cobles explanation of the family tree and who is related to whom lacks clarity, and the spiritual development of Cobles characters doesnt stand much ground.

Addies character, the only true Christian character, doesnt falter in her faith, but such a struggle could add to her search for fulfillment, love, and family, which she ultimately finds more in romance than in God. Addie exemplifies a strong Christian, however, and her strength may give readers a similar resolve to Finally, be strong in the Lord and in the strength of his might (Ephesians 6:10).  Harmony Wheeler, www.ChristianBookPreviews.com

▼▲
I'm the author/artist and I want to review The Lightkeeper's Daughter, Mercy Falls Series #1.
Back
Back