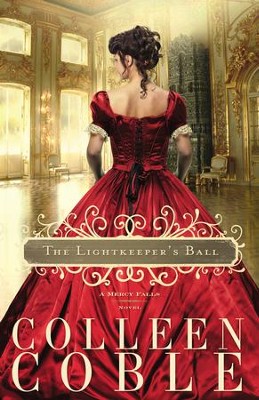 ▼▲
Olivia seems to have it all, but her heart yearns for more.

Olivia Stewart's family is one of the Four Hundred-the highest echelon of society in 1910. When her sister dies under mysterious circumstances, Olivia leaves their New York City home for Mercy Falls, California, to determine what befell Eleanor. She suspects Harrison Bennett, the man Eleanor planned to marry. But the more Olivia gets to know him, the more she doubts his guilt-and the more she is drawn to him herself.

When several attempts are made on her life, Olivia turns to Harrison for help. He takes her on a ride in his aeroplane, but then crashes, and they're forced to spend two days alone together. With her reputation hanging by a thread, Harrison offers to marry her to make the situation right. As a charity ball to rebuild the Mercy Falls lighthouse draws near, she realizes she wants more than a sham engagement-she wants Harrison in her life forever. But her enemy plans to shatter the happiness she is ready to grasp. If Olivia dares to drop her masquerade, she just might see the path to true happiness.

Romance and mystery intertwine at the turn of the 20th Century.

It is the dawn of a new century and Olivia Stewart is heiress to an empire. Her family numbers among the Four Hundred—those considered the wealthiest and most distinguished in America. Unfortunately their wealth has nearly disappeared, and now their security rests upon the Stewart daughters marrying well.

Olivia's sister, Eleanor, was engaged to Harrison Bennett, one of the nation's wealthiest men, but has since died. Now the pressure is on Olivia to take her place, despite her suspicions about Eleanor's fianc&eacute;. Using her family's long-forgotten English title, Olivia travels to Mercy Falls, California, as Lady Devonworth, hoping to learn more before committing to marriage. There she finds that Eleanor's death was no accident. And Harrison is not the man she thought he would be.

When Mercy Falls holds a charity masquerade ball to raise funds for the new lighthouse, secrets—and truths long hidden—will be revealed. But can Harrison really love Olivia when he discovers her true identity? Can she live with the repercussions of failing her family, or will she finally realize that nothing—not money, family, or romance—will ever compare to God's unconditional love?

▼▲
This Mercy Falls novel has romance, mystery, secrets and a bad guy. Coble wows the reader with a fresh storyline. Readers will enjoy peeling back the layers and discovering this is more than your average romance book. The characters are strong not only in themselves but also in their faith. While I don't normally comment on book covers, this time I have to: Wow, what an outstanding cover design this book has, it is elegant and classy, without being crass. - 4 Stars - Romantic Times

Coble's historical series (The Lightkeeper's Daughter; The Lightkeeper's Bride) just keeps getting better with each entry. Coble has a strong feel for the time period (in this case, 1910) and has scripted believable characters in suspenseful situations. Recommend the series to fans of T. Davis Bunn and Marta Perry. - Library Journal

▼▲
In The Lightkeeper's Ball, Colleen Coble tells the story of a young woman named Olivia Stewart who is troubled by her sister's curious death. Set in America during the early 1900's, Olivia's story finds her surrounded with many challenges as she organizes a ball for a charity, hides her identity to investigate her sister's death, and tries not to be charmed by Harrison, the man she suspects is her sister's murderer.

The story is an exciting romance with a good dose of mystery. One of the most touching scenes is when Harrison rescues Olivia after she has been thrown into the sea. He cradles her unconscious form in his arms and begs her not to die, crying aloud, "I love you." She wakes up hearing those words. But, in her disoriented state, she cannot tell if she has been dreaming or not. From then on, she wonders if Harrison truly told her he loved her, or if it was only wishful thinking on her part.

Olivia is torn when she discovers more about her sister's death and Harrison's noble character. However, through the trials, she realizes Harrison can be trusted. But there is a major problem: she has falsely led Harrison to believe she was only a friend of her late sister, instead of revealing her true identity. When she learns he despises the Stewart family, Olivia is reluctant to tell him. In the end, the truth is revealed. Even though Harrison is hurt by her deception, he and Olivia still want to learn to love each other.

Olivia is a wealthy young woman with ambition and a desire to find a loving husband, not a suitor only interested in her money and status. She makes it a matter of prayer, although she sometimes is too strong willed to accept Gods leading right away. During her investigation of her sister's death, she makes several faithful friends as well as a few enemies. However, there are too many similar characters to keep track of them all.

Although the story is a bit predictable, it is still an enjoyable novel. The discoveries from clue to clue and several thrilling situations make The Lightkeeper's Ball an interesting ride. I recommend this early 20th century romance for those who enjoy historical fiction.  Molly Anderson, www.ChristianBookPreviews.com

▼▲
In 1910, New York socialite Olivia Stewart resists an arranged, socially advantageous marriage, and the mysterious death of her sister Eleanor in Northern California is an unhappy but convenient excuse to go West to investigate. On the way, she is thrown off a Bay area ship and nearly drowned, so she has a number of reasons to hide her identity when she arrives in Mercy Falls, Calif. Her shipboard rescuer turns out to be her dead sister's fiancé Harrison Bennett, about whom she has suspicions. Harrison in turn has his reasons to distrust the Stewart family. In this atmosphere of deceit and suspicion, attraction between Olivia and Harrison grows. Coble spins a tangled web in this third book in the Mercy Falls series (after The Lightkeeper's Bride), with red herrings and oodles of duplicity. Some complications (letters conveniently found) simply strain credibility, as does the revelation of the villain. Coble's fans won't mind that the plotting is a little loosely woven. (Apr.) Copyright 2011 Reed Business Information.

▼▲
I'm the author/artist and I want to review The Lightkeeper's Ball, Mercy Falls Series #3.
Back
Back