The Letter to the Galatians
By: Ian Levy 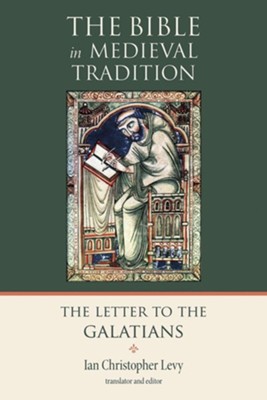 The Letter to the Galatians

▼▲
About the Series:The major intent of The Bible in Medieval Tradition Series is to reacquaint the Church with its rich history of biblical interpretation and with the contemporary applicability of this history, especially for academic study, spiritual formation, preaching, discussion groups, and individual reflection.

Each volume focuses on a particular biblical book or set of books and provides documentary evidence of the most significant ways in which that work was treated in the course of medieval biblical interpretation.

The series takes its shape in dialogue both with the special traditions of medieval exegesis and with the interests of contemporary readers. Each volume in the series comprises fresh translations of several commentaries. The selections are lengthy and, in most cases, have never been available in English before.

Compared to patristic material, relatively little medieval exegesis has been translated. While medieval interpretations do resemble their patristic forebears, they do not simply replicate them.

Indeed, they are produced at new times and in new situations. As a result, they lend insight into the changing culture and scholarship of the Middle Ages and comprise a storehouse of the era's theological and spiritual riches that can enhance contemporary reading of the Bible. They, therefore, merit their own consideration, to which this series is meant to contribute.

About: The Letter to the Galatians

The Letter to the Galatians is the inaugural volume in an exciting new commentary series, The Bible in Medieval Tradition, which seeks to reconnect today's Christians with a rich history of biblical interpretation.

In this commentary Ian Christopher Levy has brought together commentaries on Paul's Epistle to the Galatians written by six medieval theologians spanning the ninth to the fourteenth centuries. Levy provides clear, readable translations of these significant texts - which have never before been available in English or, in most cases, any modern language. He sets these works in historical and theological context through his in-depth introduction, locating each author within the broad sweep of medieval scholarship.

These remarkable Medieval commentaries, written from a deep and pervasive faith, aimed not only to increase knowledge but, more vitally, to enhance and deepen Christian belief and piety - an object of everlasting relevance to the Church.

▼▲
This work on Galatians is the inaugural volume in a significant new commentary series, The Bible in Medieval Tradition, which seeks to reconnect today's Christians with part of the church's rich tradition of biblical interpretation.

Ian Christopher Levy has brought together six substantial commentaries on Galatians written between the ninth and the fourteenth centuries. Levy's clear, readable translations of these major texts -- previously unavailable in English -- are augmented by his in-depth introduction, which locates each author within the broad context of medieval scholarship.

▼▲
Ian Christopher Levy teaches theology at Providence College. He is also editor of A Companion to John Wycliff and coeditor (with Gary Macy and Kristen van Ausdall) of The Eucharist in the Middle Ages.

▼▲
“Edited and translated by one of the most gifted and prolific historians of exegesis in the world today, this volume will be indispensable for studying the history of exegesis. Few fields are growing so rapidly in religious studies, and the need for English translations is pressing. Ian Levy here not only masterfully translates six important medieval authors at length. He also supplies a rich and detailed introduction that itself constitutes an important contribution to secondary literature on the reception of Paul’s letter to the Galatians. . . . An ideal volume with which to introduce students to this burgeoning field.”
— Kevin Madigan
Harvard Divinity School

“Ian C. Levy has translated six medieval writings (commentaries and essays) dealing with Paul’s letter to the Galatians. He thus brings these important writings to the attention of modern general readers and students of the Pauline letter. All who consult Levy’s translations will profit from the reading.”
— Joseph A. Fitzmyer, S.J.
Catholic University of America

“This first volume of a series devoted to medieval commentaries on sacred scripture, with its capacious introduction and wide choice of translated texts, augurs well for the project as a whole. The medieval masters of what they themselves called ‘the Sacred Page’ brought both deep devotion and skill to their consideration of the Word of God. One only hopes that the subsequent volumes measure up to the high bar set here by Levy.”
— Lawrence S. Cunningham
University of Notre Dame

“Levy’s volume offers outstanding access to medieval commentaries on one of Paul’s most influential letters. Anyone interested in the history of exegesis will find here a treasure trove; moreover, no one invested in the ‘new perspective on Paul,’ whether pro or con, can afford to neglect these medieval interpretations of the letter to the Galatians.”
— Boyd Taylor Coolman
Boston College

▼▲
I'm the author/artist and I want to review The Letter to the Galatians.
Back
×
Back
×