The Last Days of Jesus, DVD Based Study
By: Matthew Williams 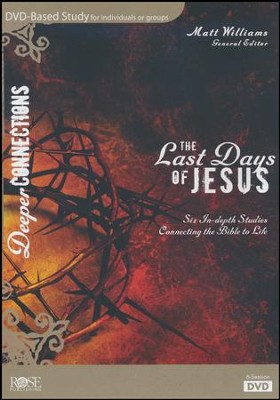 The Last Days of Jesus, DVD Based Study

From Jesus' triumphal entry into Jerusalem to His glorious resurrection, the Last Days of Jesus DVD Bible study provides a fantastic overview of six major events surrounding Jesus' death and resurrection! Each of the six sessions starts out in Israel, showing key locations such as the Garden of Gethsemane and the Mount of Olives.

Taught by leading scholars and professors who offer excellent overviews along with historical and cultural context, this study will deepen your understanding of key Easter events. The DVD has all of the teaching session which last approximately 30 minutes and a downloadable leader guide.

About the Speakers and Host

Dr. Darrell Bock is research professor of New Testament Studies at Dallas Theological Seminary. An editorat-
large for Christianity Today, he speaks and teaches on the person of Jesus both nationally and
internationally.

Dr. Gary Burge is professor of New Testament at Wheaton College and is a sought-after conference
speaker. His experiences in Beirut, Lebanon during its civil war beginning in the 1970s helped him to see
how valuable it is to understand the world of the Middle East in order to correctly understand the biblical
world of Jesus.

Dr. Scott Duvall is professor of New Testament at Ouachita Baptist University in Little Rock, Arkansas, where
he won the Outstanding Faculty Award four times. He has pastored various churches, and presently is copastor
of Fellowship Church in Arkadelphia, Arkansas.

Professor Susan Hecht is instructor of New Testament at Denver Seminary and is completing a doctorate in
New Testament from Trinity Evangelical Divinity School, before which she ministered on college campuses
with Campus Crusade for Christ for 20 years.

Dr. Mark Strauss is professor of New Testament at Bethel Seminary in San Diego, California. He is a frequent
preacher, served in multiple interim pastorates and authored many books and commentaries.

Dr. Matt Williams, General Editor of the Deeper Connections DVD series, is associate professor of New
Testament at Talbot School of Theology, Biola University. A former missionary to Spain, Matt preaches and
teaches in churches throughout the United States and Spain.

Margaret Feinberg, Host, is a popular speaker at churches and national conferences. Named one of the
"Thirty Emerging Voices" of Christian leaders under 40 by Charisma Magazine, she has also written more
than 700 articles and a dozen books.

Session 1: From Warrior to Servant: Jesus the Messiah

Session 2: A Glimpse of Glory: The Transfiguration

Session 4: Love to the Full: The Last Supper

Session 5: The Ultimate Victory: The Trial and Death of Jesus

Session 6: The Death of Death: The Resurrection of Jesus

The Last Days of Jesus DVD, the second released DVD in the Deeper Connection series, invites us to see the behind-the-scenes truth of the main events of Jesus' death. Six professors with specialized areas of knowledge each emphasize three components: 1)Historical and cultural background; 2) An engaging, close look at the biblical text and its meaning and 3) Accurate, encouraging, and challenging applications of the Bible’s message to life today. Each of the six sessions last 25-30 minutes.

Unlike any other Bible study available, this visually stunning DVD series is written and taught by biblical experts - six professors with specialized areas of knowledge. This DVD includes an introduction from Israel and was filmed in diverse locations such as the Rocky Mountains, downtown Chicago and the Arizona desert.

▼▲
I'm the author/artist and I want to review The Last Days of Jesus, DVD Based Study.
Back
×
Back
×