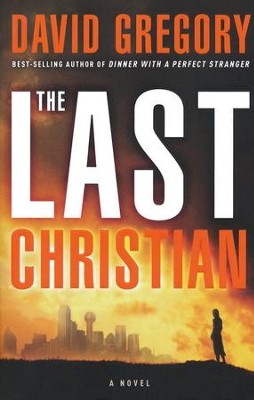 ▼▲
When missionary Abigail Caldwell emerges from her jungle village in A.D. 2088, she arrives in America to find Christianity has disappeared---and brain transplants promise eternal life! Determined to restore the nation to God, Abby joins forces with historian Creighton Daniels. What will they do when a powerful conspiracy threatens humanity's spiritual future---and their own lives? 352 pages, hardcover from Waterbrook.

▼▲
In the future, it’s possible to live forever—but at what cost?

Christian missionary Abigail Caldwell emerges from the jungle for the first time in her thirty-four years, the sole survivor of a mysterious disease that killed her village. A curious message from her grandfather leads Abby to America, only to discover a nation where Christianity has completely died out.

But a larger threat looms. The world's leading artificial intelligence industrialist has perfected a technique for downloading the human brain into a silicon form. Brain transplants have begun, and with them comes the potential of eliminating physical death altogether.

As Abby navigates a society grown more addicted to stimulating the body than nurturing the soul, she and Creighton Daniels, a historian troubled by his father's unexpected death, become unwitting targets of powerful men who will stop at nothing to further their nefarious goals. Hanging in the balance—the spiritual future of all humanity.

▼▲
DAVID GREGORY is the best-selling author of Dinner with a Perfect Stranger, A Day with a Perfect Stranger, The Next Level, and the co author of the nonfiction book, The Rest of the Gospel. After a ten-year business career, he returned to school to study religion, sociology and communications. He holds master's degrees from Dallas Theological Seminary and the University of North Texas. A native of Texas, he now lives in the Pacific Northwest.

▼▲
The hit sci-fi show Battlestar Galactica meets the New Testament in the new novel by Gregory (Dinner with a Perfect Stranger ). In the year 2088, Christian missionary Abigail Caldwell leaves her New Guinea village to seek help for fellow villagers, who have all been stricken by a mysterious disease. A message from her grandfather, an American neuroscientist who is the co-inventor of a silicon brain replacement, draws her to America, where religion has died out. Abby joins forces with a historian who has a connection to Abbys family as they investigate the death of her grandfather and face the spiritual implications of transhumanityhumans with replacement silicon brains that promise eternal life but make impossible personal connection with God. The plotting is intricate and imaginative, and the religious elements go beyond formula, though the political intrigue plot thread is less convincing. Gregorys approach is fresh, and hes produced a page-turner. (May) Copyright 2010 Reed Business Information.

▼▲
David Gregory explores a challenging question in The Last Christian: Is it possible that Christianity as it is known in America today is leading itself to its own extinction? The novel is set about 80 years in the future, in a world where Christianity has died out. Abigail Caldwell is the daughter of missionaries to a secluded jungle tribe, but she leaves the jungle for the first time ever when her whole tribe dies of a mysterious disease. An old message from her deceased grandfather sends her back to America with a mission to reintroduce Christianity to a nation that thinks it doesnt need faith. She finds herself bewildered and frightened by a totally alien world where every car is automated, people all but live in Virtual Reality, and college students are tested on whether they can form the right questions to get information off the Grid. But perhaps the most incredible development is that scientists have just developed an artificial brain, making brain transplants possible and perhaps even eliminating physical death.

In this brave new world, Abby finds one person who at least respects her faith: a historian named Creighton Daniels, who has recently lost his father to what appears to be suicide. But a troubling message forwarded to Abby from her grandfather, sent just before he died, reveals that he had been involved in something he considered dangerous; however, he wasnt able to complete the message. Whats even stranger is that her grandfather sent a remarkably similar message to Creightons father right before his suicide. As Abby and Creighton begin searching for the truth behind all of this, they find that their questions are tied to events that powerful people wish to keep secret. It is Abbys faith that may be the key to the whole mazeif she can understand her own faith.

Gregory writes The Last Christian in both a first person perspective for Creighton and a third person perspective for everyone else. This unique structure works well to give insight into characters minds while moving the story along effectively, although it may slightly throw readers off at first. It does help to let readers into the relationship developing between Creighton and Abby, as they tentatively find common ground in their opposing beliefs and explore the possibility of friendship, and perhaps more. This relationship is fairly believable except for a few occasions in which Abby seems to act out of character, particularly when those actions dont seem to align with her beliefs.

Abbys relationship with Christ looks a great deal like the average Christian walk today: all the theology is good, spiritual disciplines are there, and she sees Gods light. However, she doesnt seem to know that light. John 1:9-10 says, The true light, which enlightens everyone, was coming into the world. He was in the world, and the world was made through him, yet the world did not know him (emphasis added). In the same way, Abby seems to be missing out on the depths of Christs light and life, as are most Christians today.

Abby is an interesting character, a strong and intelligent woman thrown into a world completely outside her realm of knowledge. Her natural questions and discovery of life in a futuristic America serve as a way for readers to explore with her, making the development of the book very natural. As a character, she draws readers to her life and to the whole story; her strengths and weaknesses are believable and ones with which readers will identify. Creighton is also a relatable and interesting character; he may be particularly helpful for non-Christians reading the book because he asks many questions they would ask. In fact, each character in the book is engaging and well-developed for his or her role in the story.

Throughout the course of the story, Gregory discusses thought-provoking topics from faith to technology without ever seeming preachy. He invites readers into a world that appears to be drastically different from our own, then reveals that its just an extrapolation of how were living now. In this way, the questions he raises do hit perhaps too close for comfort; yet, he doesnt accuse or alienate readers. Instead, he provokes the interest of the reader with subtle questions, engaging characters, and a superb plot. Its a good book for both Christians and non-Christians because it probes at the heart of why Christians believeand actas they do. Overall, this book is an excellent story that will linger in ones thoughts for a long time.  Corinne Hills, www.ChristianBookPreviews.com

▼▲
I'm the author/artist and I want to review The Last Christian.
Back
×
Back
×