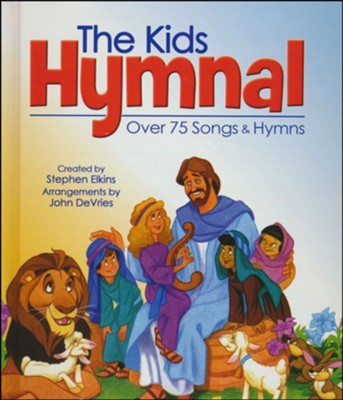 Introducing a brand-new hymnal for children! The Kids Hymnal is packed with 75 non-denominational classic and contemporary songs and choruses. Designed specifically for kids, it has colorful, eye-catching illustrations and easy-to-read print with lyrics and melody lines on each page. At the end of each song you'll find The Reason We Sing section that explains the story behind the song, as well as an application lesson, and a short My Affirmation sentence to reinforce the message. Created by Grammy-nominated producer Stephen Elkins and Dove Award-winning arranger John DeVries, you'll find songs like "Amazing Grace," "Jesus Loves Me," "Fairest Lord Jesus," "I Will Sing of the Mercies," "Deep and Wide," "Joy to the World," and many more. The songs are also indexed both by title and topic to make it easy to find exactly what you're looking for. The Kids Hymnal is perfect for children's choirs, Sunday school sing-alongs, children's church, or family fun at home!

Hendrickson Worship presents the first non-denominational hymnal for children in many years.

HYMNS
• Amazing Grace
• Be Thou My Vision
• When the Roll Is Called Up Yonder
• The Old Rugged Cross
• Holy, Holy, Holy
• Come, Christians, Join to Sing
• Blessed Assurance
• Standing on the Promises
• Fairest Lord Jesus
• Near the Cross
• Count Your Blessings
• When We All Get to Heaven
• O How I Love Jesus
• What a Friend We Have in Jesus
• I Have Decided To Follow Jesus
• All Creatures of Our God and King
• He's Got the Whole World in His Hands
• Joyful Joyful We Adore Thee
• O Happy Day!
• Leaning on the Everlasting Arms
• At the Cross
• Stand Up, Stand Up for Jesus
• Come Thou Almighty King!
• Crown Him with Many Crowns
• For the Beauty of the Earth
• How Great Thou Art
• God Will Take Care of You
• He Keeps Me Singing As I Go
• Have Thine Own Way, Lord
• This Is My Father's World

SUNDAY SCHOOL CLASSICS
• Deep and Wide
• Jesus Loves the Little Children
• Isn't He Wonderful
• I've Got the Joy, Joy, Joy, Joy
• Father Abraham
• I Am A C-H-R-I-S-T-I-A-N
• I Love Him Better Every D-A-Y
• We Are Climbing Jacob's Ladder
• My God Is So Big
• This Little Light of Mine
• Do Lord

SCRIPTURE SONGS
• Children, Obey Your Parents
• The Lord Is My Shepherd
• In the Beginning
• The Lord's Prayer
• I Know the Plans I Have For You
• Hidden In My Heart
• For God So Loved the World
• The Roman's Road
• The Lord Is My Rock
• J-O-Y
• I Will Sing of the Mercies
• Glorify the Lord with Me
• When I am Afraid
• Come to Me
• The Fruit of the Spirit
• God Works for the Good
• Let Everything That Has Breath
• What is Impossible for Men

EASTER
• Christ the Lord Has Risen Today
• Do Remember
• Hosanna

▼▲
It had been many years since the release of a nondenominational hymnal especially for children. Hendrickson Worship has changed that with the launch of The Kids Hymnal products. Bright illustrations and an affirmation and application lesson for each song make the new songbook the perfect way for churches and parents to share their musical heritage with elementary school-aged kids.

 Theres a need to reintroduce children to the theology and music of the founders, says Kids Hymnal creator and prolific childrens author Stephen Elkins. The great hymns of Wesley sing of the glory of God and use some pretty deep words. Thats OK, isnt it? It gives parents an opportunity to speak of grace in simpler terms and explain the meaning. Jesus said, Let the children come to me, so His message must certainly be applicable to them. So much of todays Christian music is very repetitive and lacks the spiritual depth found in the hymns.'

Elkins also points out that music is an excellent educational tool. Thats what hymns are: educational/praise songs that teach us about the Lord, he says. But isnt the frequently archaic and stylized language of many hymns too difficult for young children? For example, modern kidsmost of whom havent been on a farmreport misunderstanding bringing in the sheaves as bringing in the sheep, the sheets, or even bringing in the cheese. In addition, the hymn is correlating physical farm produce with spiritual fruitnot a simple concept. Elkins argues that The Kids Hymnal addresses just this problem. I would call [hymns language] traditional language, which gives [kids] a little taste of history Elkins says. And thats how I like to frame it with kids: Listen to the language of our great-great grandfathers. Some might argue that the content is over the head of a 4-9 year old, he adds. To safeguard against that happening, we included an About This Hymn section on every hymn page. Kids can read an explanation of difficult terms or concepts. For example, Elkins says, in the song Come Christians, Join to Sing, a child comes to know what it means to be a Christian. The affirmation in this hymn is I will sing to the Lord, for I am a Christian. We apply the verses to the childs life and then the child speaks or affirms the principle Besides applications lessons, affirmations, and illustrations by Tim OConnor, The Kids Hymnal features melody lines, lyrics, and guitar chords; stories behind the hymns; and indexes by title and topic. Correlating products include a piano accompaniment book; a split-track, three-CD set; and a sing-along DVD with the words printed on the screen. Each product includes all 80 featured songs and hymns, grouped by categories:

 Sunday-school classis such as Deep and Wide

 Songs based on Jesus teachings

Unison arrangements are in easy-to-sing keys, for use in childrens choirs in churches and schools, or for simple family fun at home. The CDs and DVD feature the popular Wonder Kids Choir (100 All-Time Favorite Bible Songs, The Jabez Prayer Song Collection). The hymnal released in October 2007, the correlating products in August 2007, and all except the accompaniment book carry a $9.97 introductory-value retail price. The kids love these songs, Elkins says. They have a modern sound without all the heavy drums and guitarsno heavy rock, no rap. Dont get me wrong, the rhythms are fun and engaging, but they still meet the conservative standard. [Kids] like learning these big church songs in an easy way, he says. They sound great when they sing, and its really good for their confidence. Kids love singing out of their own hymn book, too. Most are accustomed to the words being up on a screen without the notes. How excited they are when they begin to understand how to read the music notes, even if its in a general way.  CBD Retailers & Resources

▼▲
I'm the author/artist and I want to review The Kids Hymnal: 75 Songs & Hymns.
Back