Skip to main content
The Key to Everything
By: Valerie Fraser Luesse
Stock No: WW737508 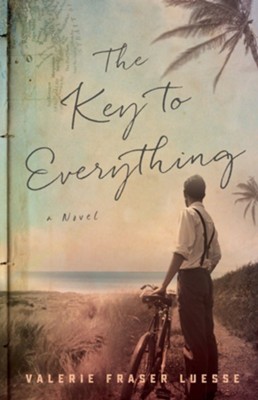 The Key to Everything

Based on a true story, Valerie Fraser Luesse’s new novel takes
readers on an incredible journey of self-discovery. The poignant prose,
enchanting characters, and captivating settings in The Key to Everything make
this a moving story that readers won’t soon forget.

Peyton Cabot’s fifteenth year will be a painful and transformative one. His father,
the reluctant head of a moneyed Savannah family, has come home from WWII a
troubled vet, drowning his demons in bourbon and distancing himself from his
son. When a tragic accident separates Peyton from his parents and the girl of his
dreams seems out of reach, he struggles to cope with a young life upended.

Pushed to his limit, Peyton makes a daring decision: he will retrace a slice of the
journey his father took at fifteen by riding his bicycle all the way from St. Augustine to Key West,Florida. Part loving tribute, part search for self, Peyton’s journey will unlock more than he ever couldhave imagined, including the key to his distant father, a calling that will shape the rest of his life, and therealization that he’s willing to risk absolutely everything for the girl he loves.

▼▲
Peyton Cabot's fifteenth year will be a painful and transformative one. His father, the heroic but reluctant head of a moneyed Savannah family, has come home from WWII a troubled vet, drowning his demons in bourbon and distancing himself from his son. A tragic accident shows Peyton the depths of his parents' devotion to each other but interrupts his own budding romance with the girl of his dreams, Lisa Wallace.

Struggling to cope with a young life upended, Peyton makes a daring decision: He will retrace a journey his father took at fifteen, riding his bicycle all the way to Key West, Florida. Part declaration of independence, part search for self, Peyton's journey will bring him more than he ever could have imagined--namely, the key to his unknowable father, a reunion with Lisa, and a calling that will shape the rest of his life.

Through poignant prose and characters so real you'll be sure you know them, Valerie Fraser Luesse transports you to the storied Atlantic coast for a unique coming-of-age story you won't soon forget.

▼▲
Valerie Fraser Luesse is the bestselling author of Missing Isaac and Almost Home, as well as an award-winning magazine writer best known for her feature stories and essays in Southern Living, where she is currently senior travel editor. Specializing in stories about unique pockets of Southern culture, Luesse received the 2009 Writer of the Year award from the Southeast Tourism Society for her editorial section on Hurricane Katrina recovery in Mississippi and Louisiana. A graduate of Auburn University and Baylor University, she lives in Birmingham, Alabama, with her husband, Dave.

Can you please provide a brief summary of your new novel, The Key to Everything?
Fifteen-year-old Peyton Cabot is part of a wealthy Georgia family. His father, a troubled World War II vet, suffers a tragic accident that changes everything for his wife and son. As Peyton struggles tocomprehend what’s happening, he re-creates part of a bike ride his father took at fifteen, traveling from
St. Augustine to Key West, Florida. Searching for answers about himself and his father, Peyton is also determined to reconnect with the love of his life, Lisa Wallace. What happens to him during this monumental bike ride will shape the rest of his life.

The Key to Everything is based on a true story. How much of your narrative includes the real-life
account?
My friend Holly Patterson Belk told me the story of the bike ride to Key West, which her father
completed—from Waycross, Georgia, to Key West and back—when he was just fifteen. He did it on a bet
with some of his friends and really did become something of a celebrity as local papers covered his
journey. The part about sleeping in jails and firehouses, with an introductory letter from his police chief,
is true. So are the mosquito attack and his recovery at the naval base in Key West. And there was a special
girl involved! Holly let me read some letters that her dad wrote to her mother when he was a fighter pilot,
and I used their wonderful connection to each other to imagine Peyton and Lisa’s romance. The rest,
though, is fiction. Holly didn’t really know much about what happened to her dad on the bike ride. And I
invented the Cabot clan and all their machinations. Her dad, Ben Lane Patterson Jr., had an amazing life,
flying 101 missions and becoming a brigadier general, an attorney, and a judge.


How difficult was it to write a story from the perspective of a fifteen-year-old boy?
I guess I didn’t think of him as a general fifteen-year-old boy but as a very specific one—a boy who had
been raised in a specific way and in a particular place. Readers will have to judge whether I got it right.

There are several characters who play integral roles in this story. Which character do you resonate
with the most?
I love Aunt Gert! I borrowed her name from my Aunt Joyce, whose brothers and sisters nicknamed her
Gert. Aunt Joyce was very direct, with a dry sense of humor that suited my character well.

The Key to Everything is a coming-of-age novel. What were the circumstances that led Peyton to
take his journey of self-discovery?
His sensitive and loving father has come home from the war a troubled vet, drowning his memories in
bourbon and distancing himself from Peyton. One family tragedy follows another, and then Peyton is
separated from Lisa, the girl of his dreams. It all happens the summer of his fifteenth year, pushing him to
test himself, retrace his father’s journey, and try to find some answers about his family and himself.

Peyton’s expedition resulted in several positive outcomes. Can you please relay some of the ways
this journey helped change and shape the rest of Peyton’s life?
The most important lesson—literally “the key to everything”—is that you can’t retrace someone else’s
journey. You can’t follow someone else’s map, no matter how much you love them. You have to find your own way, carve your own path. And if you’ve truly found the love of your life, there’s no sacrifice you won’t make to hold on to them.

As an Alabama native, you bring a unique flavor to your novels. Each work is packed with the rich feel of Southern charm and culture. Can you please tell readers about the settings in The Key to
Everything?
I’ve spent a lot of time traveling the South and telling stories about it for Southern Living, and I guess I
bring some of my old travel writing habits into my fiction. It’s important to me that readers really see the
places my characters inhabit—from the downtown streets of old St. Augustine to surf towns like Flagler
Beach to the otherworldly Key West. My first trip there was for a writing workshop, and I was just
mesmerized by the palm trees and the historic architecture and the turquoise water. Eerily beautiful.

What type of research was required to accurately portray this tale?
I wanted the relationship between Peyton and Lisa to capture at least a few elements of the real romance
between General Patterson and his wife, Bette. So their daughter, my friend Holly, let me read some of
their correspondence, both before and after they married. I read books on old Florida and watched
documentaries on Key West during the war years and before. Probably my most important research tool
was Google Maps, because I had to carefully track where Peyton would be on any given day and make
sure I kept the towns in the correct order from north to south. I even watched a few YouTube videos on
boating and polled my biking Facebook friends about their injuries. So I guess I used just about every
research tool imaginable.

What are you working on next?
I’m very excited about my fourth book, which will be set in Louisiana’s Atchafalaya Basin, where there’s
so much rich Acadian culture. Can’t wait to take readers into the bayou.

▼▲
I'm the author/artist and I want to review The Key to Everything.
Back