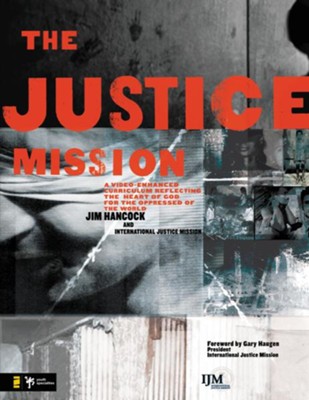 ▼▲
The Justice Mission is a video-vased curriculum that depicts the stark facts about oppression and injustice around the world...and presents a Bible-based approach to dealing with them! In the video segments, students will follow the visit of four American teens to squalid corners of India. They will be prompted to think again, and again, about evil they find...and about bullying, prejudice, and attitudes that God hates in their own neighborhoods and the hallways of their schools. The five sessions are: Oppression, What God Hates, Joining the Fight Against Injustice, God's Vision, Do It Now! Includes an abundance of worksheets, action items, group activities, journaling assignments, web links, and agenda-items.

▼▲
". . . learn to do right! Seek justice, encourage the oppressed. Defend the cause of the fatherless, plead the case of the widow." For kids raised in contemporary American churches, these words from Isaiah might ring true but they wouldn’t have many ideas about how to do those things. They just haven’t heard much in Sunday School about actually creating justice. That’s about to change. For 25 years Jim Hancock has been a youth worker and creator of youth ministry resources like The Compassion Project (to help adolescents make a difference for the poor), EdgeTV (to help youth workers create safe places to talk about unsafe things) and Good Sex (to help kids wrestle with sexuality). Now, collaborating with The International Justice Mission, Hancock has created a process to engage youth groups in God’s call to seek justice on earth. In the last decade of the 20th century, The International Justice Mission emerged as an effective global instrument for extracting children from forced labor, releasing girls from prostitution, bringing murderous cops and soldiers to justice and restoring stolen land to poor farmers--all in the name of Jesus. Now they’re telling the American church what they’ve learned about the character and methods of oppression, God’s passion against injustice and how to join the fight against evil. What a story! There’s nothing like The Justice Mission. In four sessions youth workers will engage their group in understanding and embracing four very big ideas: * How injustice works (and how to strike back). * How much God hates injustice (and how to hate what God hates). * How to answer God’s call to fight injustice (beginning where they are). * How to trust God’s resources (doing God’s work, God’s way). Beyond summer mission trips, beyond child sponsorship, beyond personal piety, The Justice Mission is the next step in doing what Jesus would do. This curriculum includes a music CD featuring music by top Christian artists, produced by Squint Entertainment (producer of Roaring Lambs), and a video for use with the leader’s guide.

Jim Hancock invested two decades as a church-based youth worker. Now he spends his days writing and creating digital movies and learning designs for youth workers, parents, and adolescents. He's the author of many youth ministry resources including How to Volunteer Like a Pro and The Justice Mission, and co-author of Good Sex 2.0 and The Youth Worker's Guide to Helping Teenagers in Crisis.

▼▲
I'm the author/artist and I want to review The Justice Mission: Leader's Guide.
Back
×
Back
×