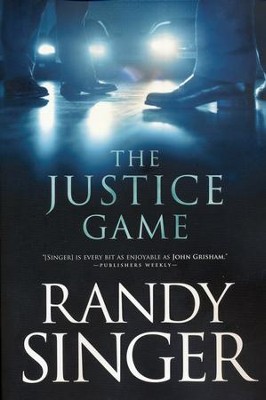 ▼▲
Bursting into a television station, the gun-toting target of an investigative report kills a co-anchor. When the gun manufacturer is sued, defense attorney Kelly Starling and prosecutor Jason Noble battle each other in court---but the real conflict lies with unseen forces bent on destroying them both. (The verdict was rendered by an actual reader poll!) 400 pages, softcover from Tyndale.

▼▲
After the target of an investigative report storms a Virginia Beach television station, he kills one of the anchors before the SWAT team takes him down. Following the victim’s funeral, her family files a lawsuit against the gun company who manufactured the killer’s weapon of choice. The lawyers for the plaintiff and defendant—Kelly Starling and Jason Noble—are young, charismatic, and successful. They’re also easy blackmail targets, both harboring a personal secret so devastating it could destroy their careers. Millions of dollars—and more than a few lives—are at stake. But as Kelly and Jason battle each other, they discover that the real fight is with unseen forces intent on controlling them both.

▼▲
The Justice Game by Randy Singer is chiefly a book that examines the topic of gun control in relation to the Second Amendment. Several other topics, however, such as the importance of confession and family, arise throughout the book.

During a broadcast, an anchorwoman is murdered on the set by a criminal she exposed. Her widowed husband files a lawsuit against the company that manufactured the gun used in the murder when he learns that it was sold illegally. Two young lawyers, Jason Noble and Kelly Starling, take opposing sides on the case, but realize that the case is far more complicated, deep, and even personal than they couldve possibly expected.

The plot gets more complex and suspenseful with every chapter (there are ninety-five, including the epilogue, if that says anything). Flashbacks give insight into why the characters are the way they are, and subplots and side stories illuminate the main plot and explore other themes of Christian life, including that of Mercy triumphs over judgment(James 2:13). Singer creates a great story and keeps it going until the end. And he does it all without the annoying romance subplots that many suspense books have.

Singer is a real trial attorney, so he knows what hes talking about. He knows how the system works, how people act and talk, and the things that go on behind the scenes, which makes this book much more authentic and believable. He can write from both sides of the line and makes both of the opposing arguments seem completely true. All of the characters are unique and relatable, though flawed in some way. Through the two main characters, Noble and Starling, Singer repeats the question asked in Mark 8:36: What good is it for a man to gain the whole world, yet forfeit his soul? Or in other words, Whats the point of gaining fortune and fame by winning the case if you have to lie to yourself and everybody and give up on your morals?

Theres much more to the book than is possible to describe in a review, so I would encourage anyone to read Randy Singers The Justice Game. Personally, Im not a fan of the genre, but if all of Singers books are like this one, Im out to read his entire collection.  Matt Maine, www.ChristianBookPreviews.com

▼▲
Christy Awardwinning novelist and lawyer Singer (Directed Verdict) lets the action sprint out of the gate with a murder in the first few pages. With murderer and victim dead, the moral issue of gun control takes center stage in the book, with a number of side dilemmas. The opposing counsels in the gun control case are young, ambitious lawyers, and both have hidden sins that could sink their careers. A law firm that both worked for further complicates the action. Singer piles the moral and plot complexities a bit too high; the backstories of main characters Jason Noble and Kelly Starling are relevant, but the tangled relationship between Jason and his cop father bogs down the action. The legal-thriller genre lends itself to the pattern of conversion that evangelical Christian novels require, and Singer offers logical character developments that aren't heavy-handed. The only stock feature in this well-plotted novel is the generic, fakey-sounding names (Brad Carson, Kelly Starling). But that's a quibble about a book that will entertain readers and make them thinkwhat more can one ask? (July) Copyright 2009 Reed Business Information.

▼▲
I'm the author/artist and I want to review The Justice Game.
Back
Back