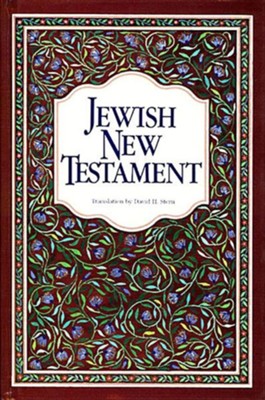 ▼▲
The New Testament is a Jewish book, written by Jews, initially for Jews. Its central figure was a Jew. His followers were all Jews; yet no translation--except this one--really communicates its original, essential Jewishness. Uses neutral terms and Hebrew names. Highlights Jewish features and Jewish references. Corrects mistranslations from an anti-Jewish theological basis. Freshly rendered into English using the Greek texts, this is a must for learning about first-century faith.

▼▲
David H. Stern, born in Los Angeles in 1935, is the great-grandson of two of the city's first twenty Jews. He earned a Ph.D. in economics at Princeton University and was a professor at UCLA. In 1972 he came to faith in Yeshua the Messiah. He then received a Master of Divinity degree at Fuller Theological Seminary, did graduate work at the University of Judaism, and was active in the Messianic Jewish movement. In 1979 the Stern family made aliyah (immigrated to Israel); they now live in Jerusalem. Dr. Stern authored the "Messianic Jewish Manifesto" from which "Restoring the Jewishness of the Gospel" is excerpted. His highly acclaimed English translation, the "Jewish New Testament," restores the New Testament's Jewishness. His "Jewish New Testament Commentary" discusses the many Jewish issues found in the New Testament. His fresh translation, the "Complete Jewish Bible", expresses the unity of the Tanakh ("Old Testament") and the B'rit Hadashah ("New Testament"). This outstanding, scholarly work offers Bible readers a thorough, biblically Jewish version of God's word.

▼▲
I'm the author/artist and I want to review The Jewish New Testament, Hardcover.
Back
×
Back
×