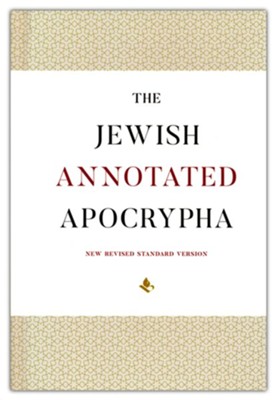 ▼▲
Almost all of the books of the Apocrypha were composed by Jewish writers in the Second Temple period. Though excluded from the Hebrew Bible, they were largely preserved by Christians. Recognized experts astutely introduce each book and offer an impressive range of essays on contexts, backgrounds, and key themes. 744 pages, hardcover.

▼▲
Building on the success of the Jewish Annotated New Testament (JANT) and the Jewish Study Bible (JSB), Oxford University Press now proceeds to complete the trilogy with the Jewish Annotated Apocrypha (JAA). The books of the Apocrypha were virtually all composed by Jewish writers in the Second Temple period. Excluded from the Hebrew Bible, these works were preserved by Christians. Yet no complete, standalone edition of these works has been produced in English with an emphasis on Jewish tradition or with an educated Jewish audience in mind. The JAA meets this need.

The JAA differs from prior editions of the Apocrypha in a number of ways. First, as befits a Jewish Annotated Apocrypha, the volume excludes certain texts that are widely agreed to be of Christian origin. Second, it expands the scope of the volume to include Jubilees, an essential text for understanding ancient Judaism, and a book that merits inclusion in the volume by virtue of the fact that it was long considered part of the canon of the Ethiopian Orthodox Church (the text is also revered by Ethiopian Jews). Third, it has restructured the order of the books so that the sequencing follows the logic that governs the order of the books in the Jewish canon (Law, History, Prophecy, Wisdom and Poetry).

Using the NRSV translation (plus Jubilees), each book of the Apocrypha is annotated by a recognized expert in the study of ancient Judaism. An Introduction by the editors guides readers though the making of the volume and its contents. Thematic essays by an impressive array of scholars provide helpful contexts, backgrounds and elaborations on key themes.

▼▲
Jonathan Klawans is Professor of Religion at Boston University. He is the author of Impurity and Sin in Ancient Judaism, Purity, Sacrifice, and the Temple, Josephus and the Theologies of Ancient Judaism, and Heresy, Forgery, Novelty .

Lawrence M. Wills is visiting professor of Judaic Studies and Religious Studies at Brown University. His books include The Jewish Novel in the Ancient World, which was named an Outstanding Academic Book of 1995 by Choice magazine for academic librarians, and also Not God's People: Insiders and Outsiders in the Biblical World.

▼▲
"It deserves to be part of the library of all scholars of Second Temple Judaism. It will also be particularly helpful in the classroom, presenting as it does a non-Christian interpretation of what most students know as Christian scripture. In that regard, it fulfills its mission admirably, as did the other volumes in this outstanding trilogy." -- Sidnie White Crawford, University of Nebraska-Lincoln and Princeton Theological Seminary, Princeton, Dead Sea Discoveries 29
"Overall, this volume is an excellent reference book. It targets a Jewish audience, offering guidance for learning the Second Temple heritage which shaped later Judaism. But it would also be a valuable book for Christian students of the bible, not only because the so-called apocryphal texts are part of Scripture in Church tradition, but also because it is important to know the Judaic heritage that formed the foundation of Christianity." -- Lydia Gore-Jones, Phronema
"...excellent essays..." -- Rabbi Dr. Stu Halpern, The Zahava and Moshael Straus Center for Torah and Western Thought

▼▲
I'm the author/artist and I want to review The Jewish Annotated Apocrypha.
Back
Back