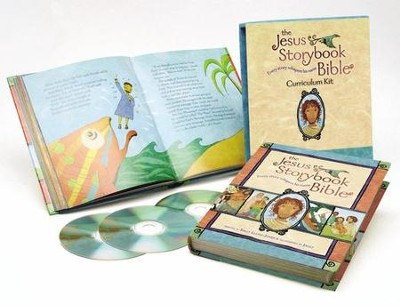 Fifty lessons include 44 lessons from the Old and New Testaments, plus 6 review lessons (3 for OT and 3 for NT). To read the curriculum introduction, please click "More Information" above and a sample lesson can be found at "Sample Pages" above. This curriculum can also work well with slightly older children up to 10 years of age.

Based on the award-winning storybook, The Jesus Storybook Bible Curriculum by Sally Lloyd-Jones and Sam Shammas contains 44 lessons revealing how Jesus is the center of each Bible story and how every story whispers his name. With activities, notes for teachers based on material from Timothy Keller, memory verses, handouts for children, and more, The Jesus Storybook Bible Curriculum invites children to join in the greatest of all adventures, to discover for themselves that Jesus is at the center of God’s great story of salvation—and at the center of their story too.

The Jesus Storybook Bible Curriculum Kit contains everything you need for 44 weeks of lessons:

Sally Lloyd-Jones is an award-winning New York Times bestselling writer of over 30 books for children. Her books are written for children (although a lot of adults are reading them, too) and include: The Jesus Storybook Bible, an ALA Notable and winner of the Platinum Book Award; Thoughts to Make Your Heart Sing, winner of the Association of Christian Publisher’s Adult Devotional Book of the year; and the Christopher Medal winner, Baby Wren and the Great Gift. Sally was born in Africa, educated in England, studied at the Sorbonne, and now lives in New York City. She can be found at sallylloyd-jones.com.

Sam Shammas has a Master’s degree in English Literature from St Peter's College, Oxford University and trained at the Ecole Jacques Lecoq in Paris. She worked for six years at All Souls Church Langham Place in London, where she co-wrote and developed Christianity Explored, Discipleship Explored, and CY (a curriculum for youth based on Mark’s Gospel). She currently works at Redeemer Presbyterian Church in New York, where she co-wrote and developed the curriculum for Timothy Keller’s The Reason for God and The Prodigal God, as well as an eight-week discipleship curriculum, Gospel in Life

Jago is an accomplished illustrator with several prestigious awards to his credit, including a Macmillian "Highly Commended" Award for Children’s Illustration in 2003, an AOI Silver Award in 2004, and the National Literacy Association Wow! Award. Jago lives in Cornwall, England, with his wife and daughter.

Q: Curriculum Kit: age level? I love the book, but is the curriculum kit worth getting? I have a class of 9 kids ranging in age from 3 to 9. The cd's don't interest me, but the DVD's and teacher/student pages do.Does the curriculum kit have student pages appropriate for those ages? Do you find the bonus DVD's helpful? Would I be better to invest in individual copies of the book so each child has one?

Although this curriculum is designed for ages 4 to 7, you could use it in a class for ages 3 to 9. The DVD includes printable lesson materials for 44 lessons with detailed instructions for each lesson. It would be nice for each child to have their own book, but not necessary.

Q: How many minutes long are each of the 44 bonus animated videos? Are these videos the same material as in the other DVD's #1-4 that can also be purchased?

Each of the video clips for the curriculum is about 1 to 2 minutes long. They are taken from the 4 DVD set, but are not the full content

▼▲
I'm the author/artist and I want to review The Jesus Storybook Bible Curriculum Kit.
Back