The Hymn Writers of Early Pennsylvania
By: Lucy E. Carroll 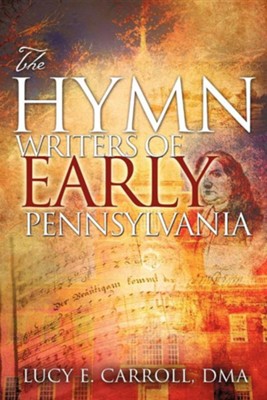 The Hymn Writers of Early Pennsylvania

▼▲
William Penns promise of religious freedom brought many diverse religious groups to Pennsylvania in the 17th and 18th centuries. Each brought pre-existing hymns and hymn tunes, but many also wrote original texts and music. This book examines the hymns of the 1694 Wissahickon settlement under Johannes Kelpius, the 18th century Ephrata Cloister of Conrad Beissel, and the hymn life of the Bethlehem Moravian Unitas Fratrum. Among the later writers of hymn text or music selected for this study are William Kirkpatrick, John Wyeth, William Gustavus Fischer, Francis Hopkinson, Eleanor C. Donnelly, and many more. Sample texts are included for many hymns, and six musical scores are reproduced. Of special interest are the earliest texts and music from the Wissahickon and Ephrata communities. Pennsylvanias hymn background is unique and compelling. The stories of the writers and their hymns should appeal to anyone interested in hymns, theology, music, or American history. Dr. Lucy E. Carroll is currently organist and choir director at the Carmelite Monastery in Philadelphia, and Adjunct Associate Professor at Westminster Choir College in Princeton NJ. She was appointed Scholar in Residence by the PHMC for the Ephrata Cloister site, and she has served as a PHC Commonwealth Speaker. She is Research Chair for the Kelpius Society of Philadelphia. Her articles on music have appeared in many journals and periodicals, and her Churchmouse Squeaks cartoons appear monthly in the Adoremus Bulletin. The recipient of numerous awards and honors, Dr. Carroll has served as organist, conductor, theatre director, educator, music coordinator, clinician and guest speaker. She chaired the music segment of the 1992 International Conference on Arts and Communication at St. Johns College, Cambridge, England and was awarded the International Order of Merit.

▼▲
I'm the author/artist and I want to review The Hymn Writers of Early Pennsylvania.
Back
×