Skip to main content
The Hobbit, The Hobbit & The Lord of the Rings Series
By: J.R.R. Tolkien
Stock No: WW39681 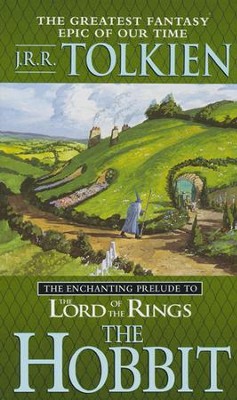 The Hobbit, The Hobbit & The Lord of the Rings Series

▼▲
Bilbo Baggins was a typical hobbit who didn't care much for adventures, until the wizard Gandalf persuaded him to join a band of dwarves to retrieve a horde of gold stolen by the dragon Smaug. He soon finds a magic ring and encounters a haunting character known as Gollum. "A glorious account beautifully told,"---New York Times. 320 pages, softcover.

▼▲
The enchanting prequel to The Lord of the Rings, The Hobbit is the classic fantasy that inspired Peter Jackson’s major motion picture trilogy

When Thorin Oakenshield and his band of dwarves embark upon a dangerous quest to reclaim the hoard of gold stolen from them by the evil dragon Smaug, Gandalf the wizard suggests an unlikely accomplice: Bilbo Baggins, an unassuming Hobbit dwelling in peaceful Hobbiton.

Along the way, the company faces trolls, goblins, giant spiders, and worse. But as they journey from the wonders of Rivendell to the terrors of Mirkwood and beyond, Bilbo will find that there is more to him than anyone—himself included—ever dreamed. Unexpected qualities of courage and cunning, and a love of adventure, propel Bilbo toward his great destiny . . . a destiny that waits in the dark caverns beneath the Misty Mountains, where a twisted creature known as Gollum jealously guards a precious magic ring.

▼▲
John Ronald Reuel Tolkien was born on January 3, 1892, in Bloemfontein, South Africa. After serving in the First World War, he embarked upon a distinguished academic career and was recognized as one of the finest philologists in the world. He was a professor of Anglo-Saxon at Oxford, a fellow of Pembroke College, and a fellow of Merton College until his retirement in 1959. He is, however, beloved throughout the world as the creator of Middle-earth and author of such classic works as The Hobbit and The Lord of the Rings. He died on September 2, 1973, at the age of 81.

▼▲
I'm the author/artist and I want to review The Hobbit, The Hobbit & The Lord of the Rings Series.
Back
Back