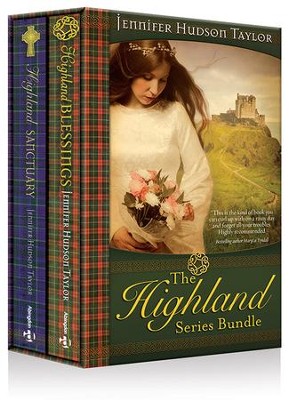 ▼▲
This bundle contains Highland Blessings and Highland Sanctuary.
Highland Blessings
Bryce MacPhearson, a highland warrior, kidnaps Akira MacKenzie on her wedding day to honor a promise he made to his dying father. While Akira’s strength in the Lord becomes a witness to Bryce, she struggles to overcome her anger and resentment when he forces her to wed him, hoping to end a half-century-old feud between their clans. While Akira begins to forgive, and Bryce learns to trust, a series of murders leaves a trail of unanswered questions, confusion, and a legacy of hate that once again rises between their families. Clearly, a traitor is in their midst. Now the one man Akira loves no longer trusts her, and her own life is in danger. Can Bryce look beyond his pain and seek the truth? Will Akira discover the threat against her before it’s too late? How will God turn a simple promise into bountiful Highland blessings?
Highland Sanctuary
Gavin MacKenzie, a chieftain heir who is hired to restore the ancient Castle of Braigh, discovers a hidden village of outcasts who have created their own private sanctuary from the world. Among them is Serena Boyd, a mysterious and comely lass, who captures Gavin’s heart in spite of harboring a deadly past that could destroy her future. The villagers happen to be keeping an intriguing secret as well, and when a fierce enemy launches an attack against them, greed leads to bitter betrayal. Then, as Gavin prepares a defense, the villagers unite in a bold act of faith, showing how God’s love is more powerful than any human force on earth.

▼▲
Jennifer Hudson Taylor is an award-winning author of inspirational fiction set in historical Europe and the Carolinas. Her books, which include Path of Freedom, Highland Blessings, and Highland Sanctuary, have been critically acclaimed by publications such as RT Book Reviews and USA Today’s Happy Ever After blog.

▼▲
I'm the author/artist and I want to review The Highland Series - eBook.
Back
Back