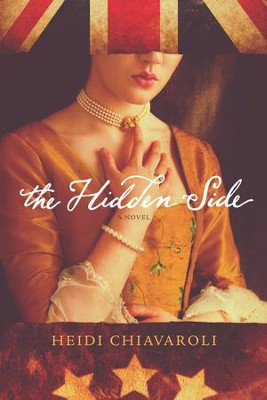 Natalie Abbott is great at giving advice to others on her radio program. But her personal life is in shambles. When she’s forced to cope with a family member’s unspeakable act, Natalie turns to the diary of Mercy Howard for comfort. Written more than 200 years prior, Mercy's dealing with the arrest and hanging of her fiancé and the invitation to become a spy herself. Natalie is amazed to discover just how much the two of them have in common.

▼▲
New York, 2016
Natalie Abbott offers answers for hurting listeners on her popular radio program. But she struggles to connect with her teenagers, with her daughter in an unhealthy relationship and her son uncommunicative and isolated. When one member of the family commits an unspeakable act, Natalie is forced to uncover who she truly is under the façade of her radio persona.

New York, 1776
Mercy Howard is shocked when her fiancé, Nathan Hale, is arrested and hanged as a spy. When she’s asked to join the revolutionary spy ring in Manhattan, she sees an opportunity to avenge Nathan’s death. But keeping her true loyalties hidden grows increasingly harder as the charming Major John Andre of the King’s Army becomes more to her than a target for intelligence.

Mercy’s journals comfort Natalie from across the centuries as both women struggle with their own secrets and shame, wondering how deep God’s mercy extends.

▼▲
4.5 star top pick. Chiavaroli’s latest timeslip novel does not disappoint. Both storylines are fully developed with strong character development, and they are seamlessly woven together. This is such an emotional tale, particularly the contemporary side, that it’s hard to put down the book without reading a few more chapters first. Relevant topics are addressed in a sensitive, yet realistic way. The story unfolds via alternating POVs (Natalie, Maelynn, and Mercy). It’s hard not to place yourself in the characters’ shoes and wonder what you would do in their situation. Yet through it all, the reader is able to see that God is still there in the midst of all the brokenness.
Chiavaroli’s all-too-timely, two-era novel asks when it is right to keep secrets and when it is right to divulge them. This page-turner, though weak on historical authenticity, will appeal to readers looking for fiction that explores Christian values and belief under tragic circumstances.
The historical intrigue of Revolutionary War New York parallels the all-too-familiar modern nightmare of a high school shooting in Heidi Chiavaroli’s compelling The Hidden Side, a novel about tragedy, faith, and personal courage.

The past meets the present through these intriguing parallel tales. The common link is Long Island, New York, once the site of British invasion and colonial rebellion—the latter involving outright resistance along with more covert and subversive tactics.

From its historical perspective, The Hidden Side follows Mercy Howard, a young Long Island woman whose fiancé, Nathan Hale, has just been hanged for espionage. Hale would later be regarded as one of America’s first great patriots. Having witnessed his death, Mercy vows to help overthrow the enemy British forces and, despite the danger involved, joins a secret ring of spies.

In the modern plotline, Long Islander Natalie Abbott cohosts a radio program offering faith-based guidance to troubled listeners. Like many mothers of teens, Natalie has issues with her high-school twins, Chris and Maelynn, and does her best to balance her work and family. Things are jolted into crisis mode, however, when Maelynn is nearly among the victims of a local school shooting—and Chris is the shooter.

With the school tragedy, the novel skillfully ventures into raw and unnerving territory. Beyond the actual event, Natalie endures Chris’s arrest and trial, the searching of her home by law enforcement, a media onslaught, and hatred from many of her neighbors for her son’s actions. She also agonizes over missed signs that her son was the victim of bullying and that his repressed rage could turn homicidal.

Both halves of The Hidden Side are singularly compelling, with more of a fine threading between stories than an obvious connection. There is also the shared message that even during times of spiritual darkness, with prayer and hope, forgiveness and new beginnings are always possible.
A journal from 1776 comforts a radio host going through family strife in the present day in Chiavaroli’s second time-jump tale set during the Revolutionary War (after Freedom’s Ring). Three women form the center of this harrowing tale, all facing the dire consequences of keeping secrets from loved ones. Natalie Abbott, a radio personality who comforts and counsels listeners in need of advice, goes through her own family trauma when her son, Chris, shoots several people, killing three, at his high school. Chris’s twin, Maelynn, faces her brother as he takes aim, yet he spares her—a moment that brings intense guilt she must grapple with for the rest of her life. Jumping back nearly 300 years, the novel turns to Mercy Howard, who becomes a spy in Loyalist Manhattan after her fiancé is hanged by the British at the outset of the Revolutionary War. As Mercy navigates treacherous New York, she keeps a journal of her secret life. Although separated by centuries, the violence and angst that surround Mercy comfort Natalie during her own period of trauma as she struggles with regret, low self-confidence, and wavering commitment to her faith. Readers already interested in time-slip novels will enjoy the emotional journey of Chiavaroli’s heroines, but those looking for a more seamless plot will become frustrated with the abrupt switching of perspectives.
Filled with fascinating historical details, Chiavaroli’s second novel (after Freedom’s Ring) once again connects two women through an artifact of the past. This heartrending tale will engage aficionados of the American Revolution and historical fiction.

Tell us a little about yourself.  Heidi Chiavaroli began writing eleven years ago, just after Jesus had grabbed hold of her heart. She used her two small boys nap times to pursue what she thought at the time was a foolish dream. Despite a long road to publication, she hasnt stopped writing since! Heidi won the 2014 ACFW Genesis contest in the historical category. Both her debut novel, Freedoms Ring, and her sophomore novel, The Hidden Side, are 4½-star Romantic Times Top Picks. Freedom's Ring was also a Booklist Top Ten Romance Debut. Heidi loves exploring places that whisper of historical secrets, especially with her family. She loves running, hiking, baking, and dates with her high-school sweetheart and husband of fourteen years. Heidi makes her home in Massachusetts with her husband, two sons, and Howie, her standard poodle.

What was your motivation behind this project?  My ideas usually begin with research. I was searching for a true-to-life historical figure from the American Revolution that could inspire a new story when I stumbled upon Agent 355, a woman who played an important part in General George Washingtons most successful spy ring, a woman whose identity we still dont know for certain. That was enough to get my imagination going! Before long, I had a solid historical story downa story about a woman seeking to redeem the wrong done her fiancé, infamous spy Nathan Hale. A story about a woman hiding behind a façade that could not only ruin every relationship she has, but could put her life in peril as well. A story about a woman who finds herself caring for a man she must deceive. The contemporary story didnt come so easily. I was brainstorming with my friend and fellow author Melissa Jagears when we remembered a recent news story about a man who had committed a terrible crime and an interview with a relative who raised him, who was just as shocked as the rest of the country over what her kin had done. Before long (and with additional help from my extraordinary editor, agent, and critique partner) we had the story of a mother, a radio host of a popular Christian morning showwhose son had committed an unspeakable crime. This woman would go through grief, but she would also struggle moving on with her life, struggle with the impulse to hide behind her radio personality, and struggle with finding her identity not in her sons deeds, but in Christ. Through her attempt to find healing, she turns to the journal her son gave her on the eve of his crime, a journal that tells the story of another woman, centuries earlier, who also felt the need to hide behind a false persona.

What do you hope folks will gain from this project?  Although most of us havent gone through something as horrific as Natalie, Maelynn, and Mercy, we have probably all struggled with the different masks we find ourselves wearing. We struggle finding our true selves. How often does who we truly are fail to translate to who we walk around being? As the host of a popular Christian radio morning show, Natalie hides from the shame caused by her sons horrendous actions behind a radio name. Filled with grief, she convinces herself she will hurt less people if she lives beneath this façade. Maelynn is a sixteen-year-old who struggles with fitting in with her peers. When her twin brother commits his unspeakable crime, she begins to realize how living untruth to try and please others has hurt not only her brother, but her entire family and community. And Mercy, like Natalie, feels she is fighting for a good cause, but when her noble intentions collide with those she cares for, she finds herself wondering if living untruth can ever produce something good.

How were you personally impacted by working on this project?  My characters always teach me new things, or remind me of things I tend to forget! With this story, I was reminded that no matter what we try to conceal, even from ourselves, there is nothing that God cant free. That the only place worth hiding is in Jesus. There, we dont have to have it all together or pretend to be something were not. We dont have to be afraid of rejection. He loves us perfectly and enough to do a good work in usa real work that will draw us closer to Him, and make us more like Him. Thats where our true identity resides.